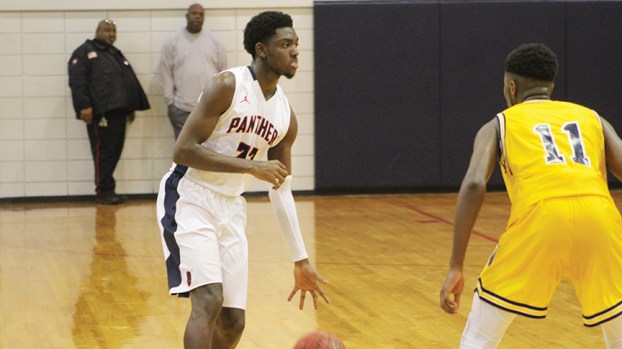 The Brookhaven High Panthers stepped out of region play on Friday for a pair of game against fellow 5A member South Jones. The girls’ game — a rematch of a playoff matchup from last season — saw the Lady Panthers (22-1) take a 53-48 win in a physical game against the Lady Braves (17-7). In the boys’ game the Panthers (18-5) got a season high 41 points from senior forward Lafollette Bogan in a 72-63 win over the Braves (4-19).

The two teams met on Feb. 23 of last year in the opening round of the MHSAA 5A state playoffs, a game that BHS won 61-58 on their home floor.

On Friday BHS led 30-25 at halftime before South Jones cut the lead to 39-36 after three quarters.

The Lady Panthers shot only 35 percent from the floor in the game and missed nine free throws but used their defensive pressure and rebounding advantage to hold off SJ. The two teams will be region opponents beginning next season along with West Jones and Laurel High.

Stallings was dominate on the boards as she grabbed a season high 18 rebounds with six of those being offensive boards. BHS won the rebounding battle 39-34. Collins handed out five assists and Louis grabbed seven rebounds.

Bogan was coming off a 30-point effort against Natchez in an overtime win earlier in the week. The impressive thing about his performance on Friday was how well he shot the ball — going 15-for-24 from the floor — to finish at 63 percent.

Tonight, the Panthers close out Region 6-5A play tonight as they host the Wingfield Falcons. The Lady Panthers torched Wingfield 82-61 in their first matchup earlier this season. BHS has already sewed up the top seed in the region tournament that takes place next week at Winfield.

On the boys’ side Wingfield took a 77-75 win at home on Jan. 18 when the two teams last played. Forest Hill has already wrapped up the top seed in the tournament with a 5-1 region record and knows they’ll face Natchez in the opening round of the tourney. That means that the Panthers and Falcons will face each other again next week, regardless of who wins tonight.

Tonight will also be Teacher Appreciation Night as the teams will honor their favorite instructors prior to their games. The regular season finale on Friday against Vicksburg at home will serve as BHS senior night recognition.