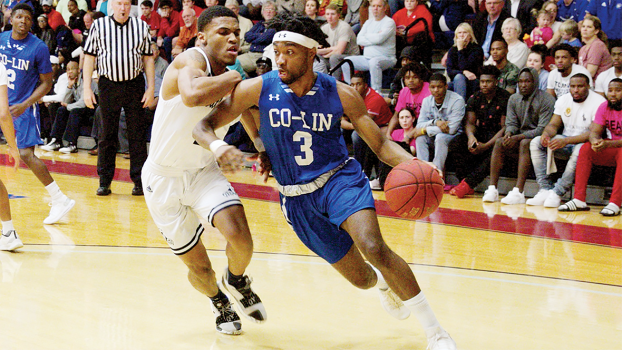 Photo by Co-Lin Sports Information Copiah-Lincoln sophomore guard Damarius Brooks puts the ball on the floor Monday night against Southwest. Brooks, a Brookhaven High alum, finished with 14 points for the Wolves. Co-Lin is back at home on Thursday when they host Hinds.

The Copiah-Lincoln Community College Wolves dropped a tough road contest to Southwest 94-87 on Monday. The loss moves Co-Lin to 10-10 overall and to 3-8 in the MACJC South Division. Co-Lin put forth staggering effort in the final minutes of the game as the Wolves rained in several threes, but came up just short. The Wolves are in Mullen Thursday, as the team hosts Hinds. Tipoff is slated for 7:30 p.m.

“We’re really proud of our guys for our effort and toughness,” said Co-Lin head coach Kenny Bizot. “We had to show toughness to come back from an unbelievable start by Southwest. I’m asking our guys to do a lot with just seven guys in a tough atmosphere. There were some loose balls we should have gotten, but overall I’m just really proud of them.”

The Bears had a very productive start to the game as the jumped out to an 8-0 lead in the first minute and a half of the contest. That lead grew over the next several minutes to 14, 22-8. The Wolves looked to be out of the contest, but began attacking the basket more consistently and kept the Bear’s lead from getting out of hand. At the half, the Wolves trailed by 11, 46-35.

In the second half, Co-Lin continued to drive to the rim but paired that with the hot hand from beyond the arc. The Wolves opened the second on a 6-0 run to cut the lead to five, 46-41. The Wolves followed that run with another offensive burst capped off by a three-pointer from Cameron Woodall that cut the lead to just two, 50-48. Southwest responded and quickly stretched that lead to 12 with a 10-0 run. The run looked to put the game away with 14 minutes left in the contest, but the Co-Lin Wolves refused to tap-out and came roaring back over the next three minutes. Back-to-back threes from Miles Daniels and Darius Kent, two layups from Kent and Woodall, and another three-ball from Daniels gave Co-Lin a one-point, 61-60 lead. The lead was Co-Lin’s first of the game, with 11:22 remaining.

Unfortunately, Co-Lin could not maintain that lead and the Bears took back over. The Wolves kept the game close as the lead floated around the two to three-point margin for the next eight minutes as the teams traded baskets, but the Bears were able to continually substitute to keep fresh legs on the court allowing them to escape with the win.

Miles Daniels led Co-Lin with 24 points after going a staggering 7-of-10 from beyond the arc. Cameron Woodall also had a great game with 21 points and five rebounds. Woodall was 3-of-6 from three-point range. Darius Kent and Damarius Brooks both scored 14, while Xavier Heidelberg netted 10. Kent was 3-of-5 from downtown. Brooks led the team in assists with six and steals with three.

Damian Dear led Southwest with 25 points, while Bob Boyd scored 16. Atticus Taylor led the Bears on the glass with 11 rebounds and completed the double-double with 14 points.