Brookhaven Academy on to finals after two wins on… 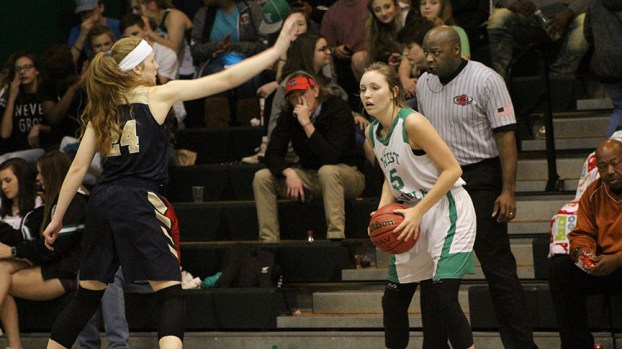 Region 7-2A title won with second half blitz

The West Lincoln Lady Bears (22-5) used a second half surge to race past the Bogue Chitto Lady Bobcats (19-9) by a 67-44 final on Friday night in the Region 7-2A championship game.

Playing on their homecourt in front of a packed gym, the Lady Bears won their second straight region title under the direction of second year head coach Brooks Smith.

It was the fourth matchup of the season between the teams with West Lincoln winning every game. The previous two matchups have been close though as the Lady Bears took four and seven-point victories over Bogue Chitto.

It looked like that would be the case again on Friday as both teams came out looking crisp on offense and defense. Bogue Chitto jumped out to a 9-2 lead after a Karly Leake 3-pointer, but junior forward Bailey Wilson would score four straight points early in the game to get the West Lincoln offense going.

Just before the first quarter horn West Lincoln senior guard Skylar Hall made a steal and converted the layup to tie the game at 13-13.

A long Megan Gerald 3-pointer early in the second quarter put WL up 16-13. The teams traded leads in the second quarter with both sides shooting the ball with confidence from range. Long jumpers from Wilson and Tyunna Brumfield of Bogue Chitto highlighted the offense for each team in the period.

Second Half Belonged to WL

In the third quarter the Lady Bears began to make their move. The West Lincoln transition game began to get easy buckets and score in traffic before Bogue Chitto could get set on defense. Position by position the Lady Bears are bigger than the Lady Bobcats. On Friday they used that size advantage to pass the ball down the court over the top of the BC defense.

Gerald grabbed a rebound and dribbled the length of the court for a layup that put WL up 42-33. That prompted Bogue Chitto coach Robby Walters to call a timeout. Another WL transition layup — this one by Brittany Sturkey — put the Lady Bears up 46-37 after the third quarter.

Bogue Chitto gets a majority of their offense from shooting the ball from the outside, but the West Lincoln defense clamped down in the final period and gave their opponents view clear shots at the basket.

It would take over five minutes into the fourth quarter before BC scored a field goal and by that time, the WL lead had steadily grown to a nearly 20-point margin.

Hall scored 15 points and, but Smith says her defense was a big part of the green and white going up big late. “She’s known for her offense, but Skylar really gave us a lift with her defense all night,” said Smith. “She did a great job guarding the ball and being active.”

Sturkey scored 18 points. In the third quarter she scored 11 of her team’s 17 points in the period. Wilson scored a team high 19 points and grabbed 12 rebounds. Katelyn Dickerson scored eight points. Gerald scored seven points and made 12 assists. As has been the case all season, Smith says her leadership set the tone for his team.

“I called her our Tom Brady when she was slinging it down court in the second half,” said Smith. “She’s been a leader for us all season and tonight she did a great job of getting us into the right places.”