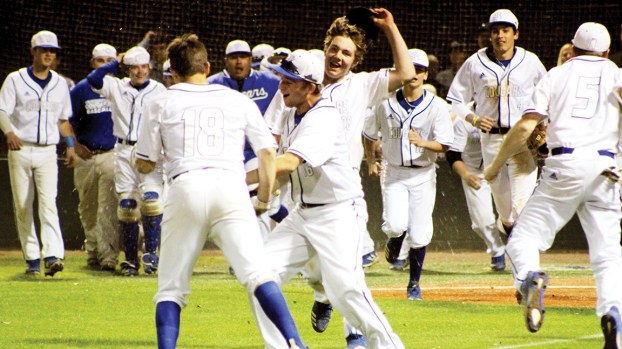 Photo by Cliff Furr Brookhaven Academy junior Tanner Watts (No. 18) gets mobbed by his teammates after hitting a game ending double Thursday against Newton County Academy.

Brookhaven Academy kept chopping Thursday night, even when Newton County Academy held a 5-2 lead after five innings. It’s fitting that a son of a logger would be the one who swung the last chop as junior Tanner Watts hit a walk-off RBI double to give the Cougars a 6-5 win over their district foe NCA.

The heroic hit culminated in a true team win for coach Tyler Parvin and his Cougars. Trailing 5-4 and down to their final two outs, BA got their first baserunner aboard in the seventh on a Judson Griffin single.

“Judson did a great job of staying within himself and getting a huge hit,” said Parvin. “Brady Spring is out with a dinged-up wrist and as an eighth grader Judson stepped up huge for us.”

Griffin then gained second base on a passed ball. The next batter was the captain, senior shortstop Dawson Flowers. Flowers, a Mississippi Gulf Coast signee, ripped a shot to left field that scored Griffin.

That set up the game winner for Watts as Flowers scored from first to set off a celebration of Cougars pouring out of the dugout at Williams-Gillis Ballpark.

Things could have completely come apart for the Cougars in the top of the sixth. Parvin replaced starting southpaw Caston Thompson with Collin Waldrop. Thompson had thrown 88 pitches over five innings and scattered six hits in giving up four earned runs. He stuck out five and walked three.

Waldrop stuck out his first batter, but then gave up a single and two walks. With the bases juiced Parvin called for catcher Nick Ogden to literally drop his gear in front of the mound and toe the rubber.

“It was a no-win situation for Nick,” said Parvin. “He threw strikes and settled in quick to get two huge outs.”

Ogden struck out Braxton Thoms and then got Hayden West to fly out to right fielder Keegan Smith.

On Tuesday the Cougars had whipped the Generals 15-3 in Decatur. In that game Watts was on the hill and only allowed four hits while striking out nine. Tuesday the Generals pitched Kemp Alderman — a man-child of a junior who is a verbal commit to Ole Miss. Alderman hits the low 90s with his fastball, but BA had no problem manufacturing runs or hits against him.

Thursday the Generals started Hayden West on the mound and the junior pitched well enough to win. He struck out eight and gave up three earned runs on three hits in six innings. Alec Thompson relieved him in the seventh and took the loss.

The Gens went up 2-0 in the fourth when Alderman and West combined to create some offense for the visitors. The Cougars came back to tie the game when Flowers singled and then moved to second on a Watts hit. Thompson advanced the BA runners with a ground out.

With two outs Cade Brown hit what looked like a sure play at the bag for NCA to get out of the inning. Instead the speedy Brown sold out to beat the pitcher to the base and allowed Flowers to score on the infield single.

Brown is also a standout in football and basketball. He has not played baseball since his freshman season. As a senior he’s returned to the team and given the lineup another weapon.

“Cade told us during football season that he was playing baseball this year,” said Parvin. “I figured he’d be tired after basketball and probably regret saying that. He looks like a natural and tonight you saw the speed he has when he beat out that single.”

After Brown got on, Watts scored on a wild pitch. The play at the plate was bang-bang, but Watts leapt and dove while avoiding the tag of the catcher to tap the plate before he was touched.

NCA then went up 5-2 in the top of the fifth, but again the pitcher-catcher exchange would prove to be troublesome for the visitors. Watts would again score in the sixth on a wild pitch after starting the inning out with a walk. Ogden then scored to pull his team within 5-4 on a Harrison Brownlee groundout.

In a season that’s been often interrupted and sometimes abbreviated by wet weather, Parvin says his team is still finding their identities and roles.

“We’ve got different guys stepping into new spots for us this season and early on it’s been about trying to figure that all out,” said Parvin. “Tanner is a great example. Last season we needed him on the mound, but we had other guys doing the work at the plate. This year he’s having to do more with his bat and he’s really coming on.”

The Cougars are in a district with NCA, Sylva-Bay, Prentiss Christian and Clinton Christian. They have a district bye next week and will play at Central Private in Baker, Louisiana, on Tuesday and host CP at BA on Saturday. They are scheduled to play today at Columbia Academy with a 2 p.m. first pitch.