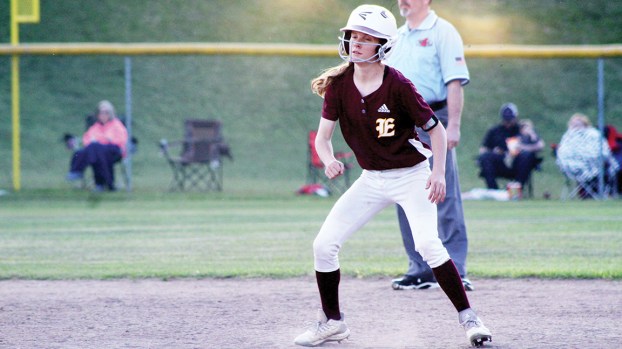 Photo by Cliff Furr Mallory Honea of Enterprise takes a lead at second base on Tuesday against Bogue Chitto. Enterprise plays at West Lincoln tonight and Bogue Chitto plays at Loyd Star.

The victory puts the Lady Cats at 3-2 in the division, which currently has them in second behind Loyd Star (5-0) and one game ahead of West Lincoln (2-3). Bogue Chitto concludes their region schedule with a game at Loyd Star today at 6 p.m. Enterprise plays at West Lincoln tonight at 6 p.m. in a game that will serve as the final region game for both schools as well.

Julianna Frazier picked up the pitching win for BC after striking out six and giving up three hits. Frazier walked two in five innings on 76 pitchers.

Enterprise got on the board in the top of the third when Natalie Harris hit a two-run homer to left center that also scored Savanna Burns. Hannah Jergins and Belle Porter also hit safely for the Lady Jackets.

First year Enterprise coach Trace Abdul-Hadi has a team that is by far the youngest in the region. Lizzie Boyte is the only senior on the roster while Porter is the only junior. Ruby Oberschmidt and Anna Jergins are the two sophomores on the team and the rest of the squad is made up of freshman, eighth and seventh graders.

“We’re extremely young,” said Abdul-Hadi. “We’re learning every day. Learning how to play the game and how to compete. Our focus is to get better every day, in every practice and game.”

Enterprise won the region title in 2017 and 2018. Last season the Lady Jackets were eliminated in the playoffs by Enterprise-Clarke in the second round. Former head coach Tyler King moved to Oak Grove after the season. King was the head coach for one season after replacing Charissa Burke.

Abdul-Hadi is a North Pike graduate who has grown up around the game of softball. He has coached baseball at North Pike, South Pike and McComb during his career. Last season Abdul-Hadi took over the North Pike boys’ basketball team after the season had begun and led the team throughout the remainder of the season.

Alicia Smith and Kristin Myers are the assistants for the Lady Jackets.

Enterprise has played a schedule filled with larger, most experienced teams. Their lone win was over St. Andrew’s and on Monday they dropped a close 9-7 loss to Natchez. One strength of the team is the pitching of the freshman Harris.

Harris has not backed down, despite having a defense behind her that is learning on the job.

“I can’t even describe how blown away I am by Natalie and her mindset,” said Abdul-Hadi. “She goes out and blocks everything out to compete day in and day out.”

When Bogue Chitto and Enterprise first met on March 21 the Lady Cats won 24-5. Improving on those results like the Lady Jackets did Tuesday are the type of gains that Abdul-Hadi wants his team to keep making.

“We are getting better, the results show that,” said Abdul-Hadi. “We’re taking our lumps this year, but we’re building something for the future.”