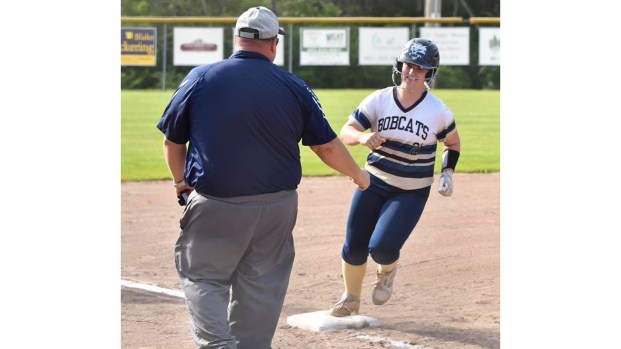 Photo by Stacy Leake Bogue Chitto sophomore Julianna Frazier gets congratulated by Lady Bobcat head coach Kris Smith after homering in a 10-0 win over Richton in game one of their MHSAA 2A state playoffs second round series.

The Bogue Chitto Lady Bobcats (17-8-1) piled up 13 hits Monday night as they run-ruled the Richton Lady Rebels (11-7) 10-0 in game one of their second-round playoff matchup at BC.

With two outs in the first Codi Leggett hit a double to get the first BC batter aboard. Baileigh Jackson then singled to score Kaitlin Poole who had come in as a courtesy runner for Leggett. Julianna Frazier doubled to score Jackson and then Julie Anna Bartram hit a triple to score Frazier and put BC up 3-0 after the first inning.

Karly Leake doubled in the second to score Kayci Beth Wallace. In the third Alece Nettles singled to score Batram who had previously reached on a double.

Leading 5-0 the Lady Cats broke the game open in the fourth with five runs. Frazier hit a home run that also scored Poole and Jackson. Later in the inning Nettles hit a single that also scored Batram and Kylie Chapman.

“We hit the ball well with two outs all game,” said BC coach Kris Smith. “We also made the routine plays on defense and Codi pitched really well. The girls seem to be playing with confidence right now.”

Bartram ended with a single, double and triple. Frazier hit a double and a home run along with four RBIs. Nettles drove in three runs.

Leggett only needed 60 pitches to pick up the win as she struck out seven and gave up two hits.