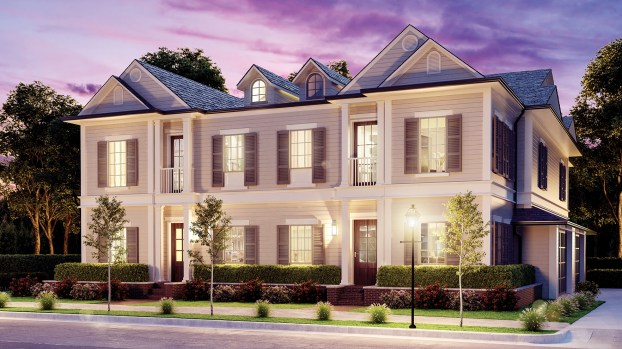 Artist rendering submitted The proposed Mill Creek development on South First Street would look similar in quality and aesthetics to this rendering of a similar development from Southport Financial. The Brookhaven project, if financing is approved, will include 48 single-family homes with two-car garages.

A plan to build four dozen single-family homes in a private development off South First Street has passed one of its first hurdles — the city is in favor of it.

The Brookhaven Board of Aldermen met with representatives of Southport Financial in May who went over the details of the project, which will be called Mill Creek, and approved the Concerted Community Revitalization Plan presented.

Southport Partner Scott Seckinger, of Tampa, Florida, has a contract on 15 acres just north of Dale Trail Northeast and plans for 48 homes with double garages that will be built at an estimated cost of $9.6 million.

“We wanted to focus our efforts and build in an area of Brookhaven that is ripe for new growth,” Seckinger said. “We want to see high-quality housing in this particular area, and this housing will be built at or above local ordinances.”

With the Board of Aldermen’s approval and a contract on the land, Seckinger is working to secure financing.

It’s a competitive-based process, but he’s seen success before.

The general contractor for this development, Winters Construction, has built similar type developments across the region in Corinth, New Albany, Oxford and also in Tennessee.

The project is still in the application process. They’re applying for federal tax credits that are purchased by private capital investors.

“The dollars that go into building this neighborhood are private dollars,” he said.

The money will come from investors who want to put their financing into opportunity zones.

“If an investor invests money in a Census tract, or a development that has been deemed an opportunity zone, which this tract in Brookhaven has been deemed, then the investor gets some capital gains benefits and other tax incentives,” he said.

The money that goes into building the roads and the houses are all private capital dollars.

“In return for being awarded these tax credits which ultimately flow through to the investor as benefits, we have to say, ‘Hey, we’re getting tax credits to help build this thing. We’ve still got to go out and get the private dollars, but in return for these tax credits, we agree to moderately restrict our units to those who make at or below 60 percent of the area median income,’” Seckinger said.

But Mill Creek won’t be subsidized housing. The development is considered workforce housing, which is also called affordable housing.

That’s because the homes can be lease-to-purchase. Or not.

“The tenant has the option to purchase the home, but does not have to,” Seckinger said.

The target tenant is someone who works, pays their own bills, pays their own rent. They qualify to live there just like others would qualify for a mortgage. There are background checks and credit checks.

A benefit of the Concerted Community Revitalization Plan however, is that once a tenant qualifies to live there, it doesn’t matter if the family’s income goes up.

“It’s good for people on the trajectory to make more each year,” he said. “No one is encouraged to stay at the same income level to live there.”

While nothing is certain yet, one of the first hurdles was to get the city’s aldermen on board with the project.

If the project gets financing — he’ll know in August — Seckinger’s plans will come to fruition.

Seckinger’s hope is to have a groundbreaking next spring followed by an aggressive 12-month construction schedule.