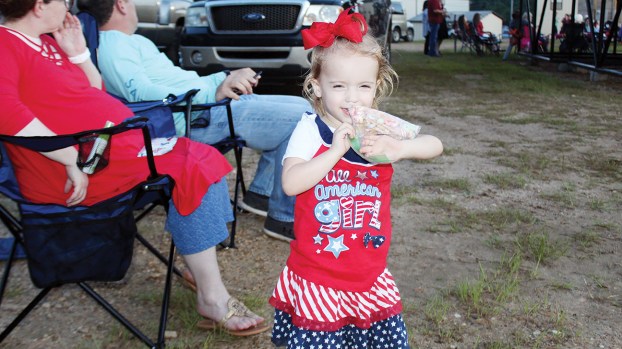 Photo submitted Annaleigh Durr gets ready for fireworks Sunday at Heritage Family Church. More fireworks are on the horizon Thursday in Brookhaven and Monticello.

Fireworks and fun planned for Fourth

The fourth annual Storm Avenue Fourth of July celebration is using its popularity to raise awareness — and funds — for Brookhaven Cares for Brignall Community Kids.

Hundreds of Storm T-shirts have already been purchased at $10 each and 100 percent of the proceeds from the sale will go to the community organization that was created to honor the memory of 7-year-old Quantavious Allen Jr., who was killed last month in a drive-by shooting in Brignall.

More shirts will be available at the July 4th celebration on Storm Avenue Thursday, which starts at 4 p.m.

The neighborhood event is open to the public.

The block party takes over Storm Avenue from Church to Byrd streets, said Sam Sones, a Storm Avenue resident and one of the many organizers of the event.

Sones helped re-start the event for nostalgia’s sake four years ago. He grew up in that neighborhood then moved away. He wanted his children to have the same memories he had so they started small and it’s grown into a huge community block party.

Most of the families on Storm Avenue will host some sort of activity in their yards like a dunking booth, waterslides and a lemonade stand, he said.

It’s designed to be a party for residents in the Storm Avenue neighborhood and their friends and family who want to participate. It’s grown larger each year, he said.

Each family attending is asked to bring a side dish or dessert to share and their own beverages.

Sones believes the block party started in the ‘70s. He fondly recalls the neighborhood parade that was the highlight of the event.

Now that parade has become a tradition. One of the first yards on Storm Avenue near Church Street will be the parade prep area. Kids are encouraged to bring their bicycles and scooters and adults should bring golf carts to decorate for the parade, which will start about 4 p.m.

Those coming by vehicle should plan to park on side streets and be careful not to block driveways, he said.

Isabel Smith will sing the national anthem at 5 p.m. on the front porch of Butterfield Mansion followed by a reading of an excerpt from the Declaration of Independence. Then everyone who plans to parade will line up at Cassidy Street and Storm Avenue about 5:15 p.m.

Farm Bureau, where Sones is an agent, will be setting up the big grill in his yard. He and the other agents will be grilling hamburgers and hot dogs to go with the sides participants provide. Sides and desserts will be lined up on a few tables in the street.

“Everyone who attends is encouraged to bring a side dish or dessert,” he said. “And bring drinks for yourself and your family.”

Chairs or blankets and coolers are a must-have, too.

Many of the yards on Storm Avenue will host kid-friendly activities. Waterslides from 12-feet to 45-feet will be set up  as well as a slip-and-slide and a dunking booth. The foam cannon will make an appearance again, he said.

There will be a lemonade stand and a sundae-making booth as well as a patriotic photo booth. A trolley will run up and down the street offering free rides.

Yard games will be on the front lawn of Butterfield Mansion and there will be a baby area with a kiddie pool in another yard.

“It’s just a ball. We have so much fun. Everybody invites their best buds,” he said. “This event is how all our neighborhood bands together and does a ton of work. It is a major group effort.”

Sones said his son, Sammy, who is 7, reminded him about the holiday last week.

“Dad, it’s only a few days until the Fourth of July,” he told him. “It’s one of my very favorite days of the year.”

The Storm Avenue event is planned to end in time for everyone to attend the annual free fireworks show at Lincoln Civic Center.

State Sen. Sally Doty, of Brookhaven, is joining in on the fun with her annual fireworks show at the Lincoln Civic Center.  This is the fifth year for the patriotic show.

A patriotic music program will begin at 9 p.m. on FM 102.1 and the fireworks will start at 9:15 p.m. The fireworks go along with the music, she said.

Doty advises viewers to park their vehicles before 9 p.m., as spots will fill up quickly.  The parking lots aren’t lit, so keeping an eye out for children will be important, she said.

The legislator looks forward to the annual Independence Day celebration.

Vicki Moak and volunteers from Warriors of the Badge will be there to distribute information about the non-profit organization that provides immediate financial support to the families of first responders killed in the line of duty. Moak’s son, Brookhaven Police Cpl. Zach Moak and officer James White were killed responding to a call in September.

Volunteers with Warriors of the Badge will be stationed at the exits with donation buckets if anyone wants to give, Doty said.

The Service Club of the Lawrence County Chamber of Commerce is hosting its annual July 4 Red, White and Blue event at Atwood Water Park Thursday starting at 5:30 p.m.

The family-friendly event is free to the public, however the Service Club is asking for donations for the Lawrence County Animal Rescue League.

This is a smoke-free event and the Mississippi Tobacco Free Coalition will sponsor a watermelon-eating and seed-spitting contest.

“We have kids from little bitty on up to adults who will be divided by ages,” Harvey said. “We always have some new ones to come in to try to unseat the champion.”

Several church booths will be selling food and there will be free watermelon available after the contest.

“We always have way more watermelon than contestants,” she said.

Firefighters from the Monticello Fire Department will be spraying down sticky kids following the contests — or who just want to beat the heat, she said.