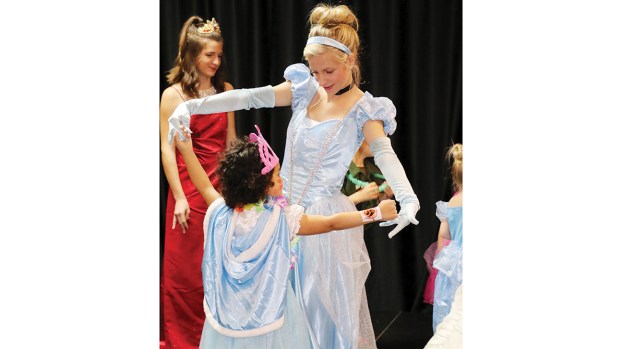 Photo submitted Gracie Gray as Cinderella plays with a child at a fundraising event.

Bruce Gray considers each of his daughters to be a princess, but only one of them is making a career out of it.

Most of the time, Gracie Gray is a typical 17-year-old girl, making plans for her senior year at Brookhaven High School and coping with being the oldest of four girls.

But when she dons her pale blue ball gown and slides her satin gloves over her wrists and past her elbows, she becomes Cinderella.

Gray first played the Disney princess at the request of her mother, Dr. Leigh Cher Gray, for a Relay for Life fundraiser at King’s Daughters Medical Center. Then her friend’s mom asked if she’d be a princess at one of her friend’s daughter’s birthday party.

She borrowed the KDMC costume and played the part. She thought it would be a one-time thing, but the idea of becoming a princess for hire appealed to her. Not only could she add to her college savings account, but she could make children smile.

Before that birthday party, she watched video tutorials and learned the ins and outs of princess performance. She created a unique princess voice and memorized responses for the most common questions, like “Where’s Prince Charming?”

Becoming Cinderella wasn’t a stretch for Gray, who is president of the Fellowship of Christian Athletes at BHS and runs cross country and track.

“I think a princess should be kind and sweet and gentle and but also very strong and independent,” she said.

With four girls in the house, Disney princesses were an integral part of their childhood. Cinderella has always been Gray’s favorite.

“I respect her a lot,” she said. “I think she’s a very hard worker and she doesn’t just get things. She works for them.”

Gray plans to attend Sanford University in Birmingham, Alabama, after graduation and major in religion. Surprisingly, her career goal is not Disney princess. She wants to become a Christian motivational speaker.

“Gracie’s always been very mature for her age,” Bruce Gray said. “She loves to work and she wants to make her own money. What she really wants more than anything else is to make a difference in the world and so this is just a little small step to doing that.”

And it’s a step she’ll soon be taking in glass slippers.

She just purchased a pair with no spares, which means she’ll need to hang onto them at the stroke of midnight.

“I’m so excited,” she said. “Mama said I have to have a gig before I could order them.”

She didn’t feel completely Cinderella without the iconic shoes.

“I usually tell the kids that they’re on display in my castle,” she said.