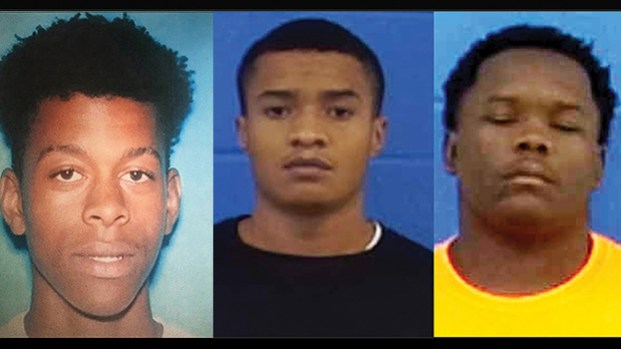 Trio in court on murder charges

Three men charged with capital murder in the death of a Brookhaven woman killed during a burglary July 20 will be in court today for initial appearances.

Jatavious Berry, 19, and Adrian Smith, 18, both of Brookhaven, are in the Lincoln County Jail, while 24-year-old Justin Anderson, of Natchez, is in Pike County Jail.

They are accused of shooting to death 21-year-old Zaria Antel Newton as she entered her house on Mason Street while the men were still inside, allegedly burglarizing the home.

Berry was arrested by Brookhaven police July 21. Smith was arrested at the Evers International Airport by the Jackson Municipal Airport Authority July 22. Anderson surrendered to deputies at the Adams County Sheriff’s Office July 22, a few hours after Smith’s capture.

Adams County Sheriff Travis Patten told reporters Anderson’s attorney called to arrange the surrender with the stipulation that no harm would come to his client and that the Adams County Sheriff’s Office would transport Anderson to Brookhaven.

Anderson’s mother brought him to the jail and he turned himself in without incident.

This will be the men’s first appearance in city court, which is held on Tuesdays at the Lincoln County Justice Court building.

Municipal Judge Brad Boerner will read formal charges against each man and decide individually if bond should be set for each.

A fourth suspect, Shawan Allen, 20, of Brookhaven, was killed in a shootout with law officers the afternoon of July 22 in the Beauregard community of Copiah County, just north of Wesson.

Deputies learned July 22 that Allen was hiding in a trailer on Bahala Road off Hwy. 51, Copiah County Sheriff Harold Jones said. As officers entered the trailer, Allen started firing at them, Jones said in a statement on social media. Multiple officers returned fire, he said.

A Copiah County deputy was shot in the back but was saved by his armored vest. He was transported to a nearby hospital with injuries that were not life-threatening.