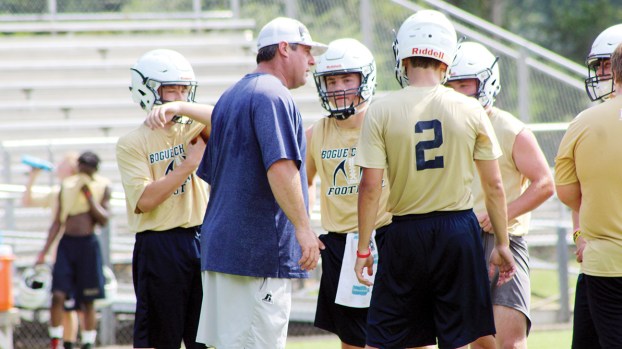 Photo by Cliff Furr Bogue Chitto coach Gareth Sartin and his team head to Rankin County tonight to take on the Pisgah Dragons. West Lincoln is the only county school playing at home tonight as Loyd Star travels to McLaurin and Enterprise plays at Sebastopol.

West Lincoln is the lone Lincoln County school hosting a home game Friday night as Bogue Chitto, Loyd Star and Enterprise are all on the road in week two of the MHSAA high school football regular season. All games kickoff at 7 p.m.

The Bobcats travel to Sand Hill to take on the Pisgah Dragons in a matchup of two 1-0 teams. Last week Pisgah beat Rankin County rival Puckett 22-20. The Bobcats also had a close win in week one when they beat McLaurin 23-20 on a last second field goal.

Pisgah has a potent running game and is no stranger to Lincoln County as they played BC, Loyd Star, and West Lincoln over the last few seasons. The Dragons are coached by Michael Granberry and finished 10-3 last year before being beaten 48-7 by Taylorsville in the second round of the playoffs.

Last season Pisgah beat Bogue Chitto 54-26 as the Bobcats played well in the second half but couldn’t dig out of a 34-0 halftime hole.

Friday night Bogue Chitto will have to slow down sophomore running back Kyshaun Gates. Gates rushed 20 times for 132 yards and one score against Puckett. Senior quarterback Dillon Usry threw for 35 yards and two scores and rans for 73 yards last week.

Against McLaurin senior quarterback Shaw King ran for 52 yards and a pair of scores while throwing for 53 yards. Junior J.T. McCaffrey rushed for 96 yards and one score.

The Loyd Star Hornets (0-1) will also be in Rankin County Friday night as they take on the McLaurin Tigers (0-1).

The Hornets are coming off a 26-0 loss to Mount Olive. McLaurin is coached by former Loyd Star coach Sidney Wheatley. Last season at Loyd Star the Hornets used a big second half to whip the Tigers 47-33 in week two of the season.

In that game Loyd Star did a great job of bottling up McLaurin running back Kenny Bacon. Slowing down the now senior Bacon will be a key for the Hornets Friday night.

The Enterprise Yellow Jackets (1-0) will head to the Leake and Scott County line Friday night to take on the Sebastopol Bobcats. The Bobcats (1-0) won their season opener 20-10 last week at Clarkdale.

EAC coach Trey Woodard says a key for his team will be slowing down Sebastopol quarterback Jaden Mann. Mann is a transfer from Leake County and last week against Clarkdale he was a one man wrecking crew as he rushed 19 times for 156 yards and three scores. Mann also went 7-of-9 passing for 75 yards via the air.

In their win over Salem the Jackets got 272 yards rushing led by 127 from senior Dylan Vaughn. Junior Jordan Stephens added 54 yards rushing and junior Edrick Mccray gained 41 yards on just four carries. Lawson Chemin averaged 12.5 yards per carry in getting 25 yards on just two rushes. Chemin also made a team high six solo tackles for the Jacket defense. Senior Donavin White snagged one interception and returned it 20 yards for EAC.

The Bears (0-1) will look to pick up their first win of the season when they host the Wildcats (0-1) Friday night.

Last week against Mize the Bears struggled to generate offense as they rushed for 66 yards and passed for 35 as a team. Chris Freeman rushed eight times for 36 yards and Justin Pratt completed one pass for 25 yards.

Logan Smith and Caleb Nations made seven tackles apiece to lead the WL defense. Nations, Tyler Allen, and Dylan Dickerson all recovered a fumble each. As a punter Pratt had six kicks and averaged 25 yards per punt with a long of 45 yards.