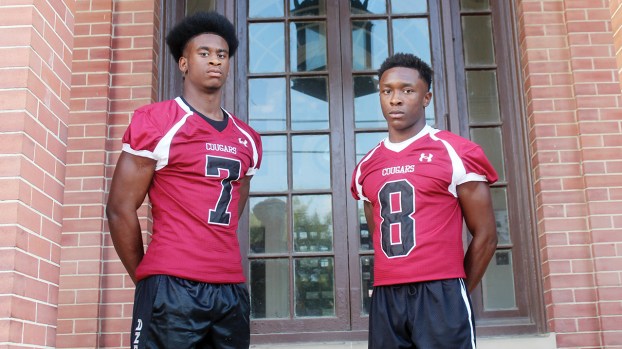 Photo by Cliff Furr Lawrence County’s Antwan Pittman, left, and Kylan Cooper have been named The Daily Leader’s Offensive Players of the Week.

The senior duo of Kylan Cooper and Antwan Pittman are the engine that drives the Lawrence County offense. Cooper is the speed and Pittman is the power and Friday night they ran wild against Brookhaven High. For their efforts the duo — who are cousins as well as teammates — have been named The Daily Leader Offensive Players of the Week.

The 42-28 win over Brookhaven High had the teams trading big plays early as BHS led 14-13 after the first quarter. The problem for the Panthers was their drives were put together just a few yards at a time, while the LC backs were grabbing huge chunks of yards on every carry.

The 6-foot-3, 210 pound Pittman rushed nine times for 144 yards and one touchdown. Pittman averaged 16 yards per carry and had a 92-yard touchdown run.

In the tough Region 6-4A that included state runners-up Poplarville, Cooper was named most valuable player of the region. In a physical 19-18 win to open the season over Hazlehurst two weeks ago, Cooper gained 128 yards on 23 carries and scored a pair of TDs.

In the win against Hazlehurst he ran for hard yards between the tackles. Friday against Brookhaven he had success on the edges of the field.

“The sweeps and outside runs were working best for us,” said Cooper.

Pittman is a hoss and would be great as a defensive end if he wasn’t so good with the ball in his hands. He gets his height from his father, Antwan Sr., who played basketball and football at Prentiss High. Antwan Jr. looks as much like a power forward as he does a football player.

In 2018 Pittman carried the ball 92 times for 715 yards and six scores as the Cougars rushed for 3,353 yards last season as a team. He’s already drawn the eye of several JUCO programs.

“They are backs that any coach would love to have,” said Anderson. “Both of them have the ability to run the power game up the middle and both can get on the edge and go to the house from anywhere on the field. They are hard workers and very good young men. They make coaching them easy.”

The LC offensive line had a complete turnover last season as the entire group graduated. Members of the 2019 Cougar offensive line include tight ends Stefan Pierce and Jamarcus Garner. Brian Bogan, who started last season as a tight end, lines up at split end. The tackles are Nicholas Clark and Austin Watts. Cannon Barnes plays center and the guards for LC are Ashton Stamps and Sherrod Hill.

The Cougars will aim for their first 3-0 start since the 2007 season when they travel to Carriere on Friday night to take on 5A Pearl River Central.