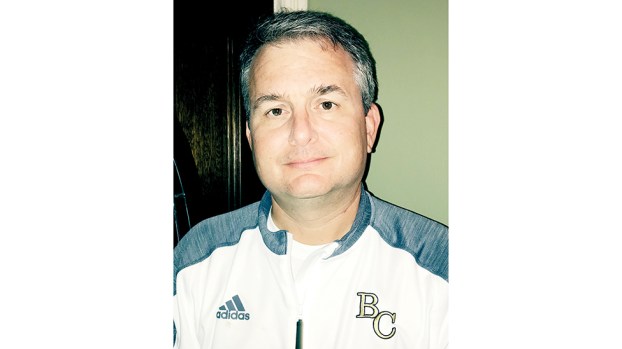 Scott Merrell says working at Bogue Chitto Attendance Center may be his best job yet.

The educator of 25 years is in his 20th year in administration and in his third year as Bogue Chitto principal.

“I’ve seen all the trends and rode the tide, but this is probably my most enjoyable job ever,” Merrell said.

He has already left his mark at the attendance center. Several marks, in fact.

In the past two years, Merrell has started a school band, a career technical program, a soccer program and an art program.

Bogue Chitto students have more opportunities than ever to stretch themselves, grow as individuals and learn teamwork.

“Equity and fairness are something I preach here over and over,” Merrell said.

“I believe in opportunities and fairness for children. And I believe we should apply what we do here in a fair and equitable manner.”

Merrell has several philosophies that he said make his job a challenge and a reward.

One is the way in which he is motivating teachers to become the experts.

With an attendance center having 13 grade levels under the same umbrella, he said, it is unreasonable to expect the principal to be a master of all subjects.

“I’m trying to develop experts in the classroom so that I become a resource and a tool to get teachers where they need to be,” Merrell said.

“It’s a concept that is unlike what most people are used to.”

Some could say that this philosophy is “the shucking of responsibilities,” Merrell said, “but it’s empowering the teachers to be all they can be.”

Merrell said he makes a point to speak to or acknowledge every student he sees. The school has 730 students.

“I either try to say hello, speak to them or let them know I recognize them — from kindergarten all the way to 12th grade,” he said.

With kindergarten through third grade, the interaction may include hugs and high five’s.

“I honestly believe God put me in this position,” Merrell said. “I have an affection for all the students regardless of who they are and where they come from. I make a conscious effort to interact with them. For the younger ones, it may be the only hug they get that day. For the older ones, it may be their only positive interaction with an authority figure saying something positive to them.”

“When Mr. Myers comes up to me, he says, ‘Hey, how are you doing?’ He shakes my hand and speaks to me in a personal way. Not just a professional way. He is very good at making others feel like they matter.”

Merrell, who describes himself as “an avid ‘80s music junkie,” has been married for 23 years. He and his wife Tanya have two sons. Alex is a senior and Andrew is in the eighth grade. Both are musicians and one is an athlete. Alex plays saxophone. Andrew plays drums.

Merrill, who plays guitar and piano, said he works 50 to 60 hours a week, so time spent at home revolves around playing music to unwind and being with his family.

He also enjoys learning in general and “learning about all things science and music in particular.”

“This is probably the most enjoyable job I’ve ever had and the best school I’ve ever worked at,” Merrell said. “It’s a special place. A unique place. A community school that receives support from the community. I could do this every day and twice on Sunday.”