Cougars run past BHS; BC piles it on 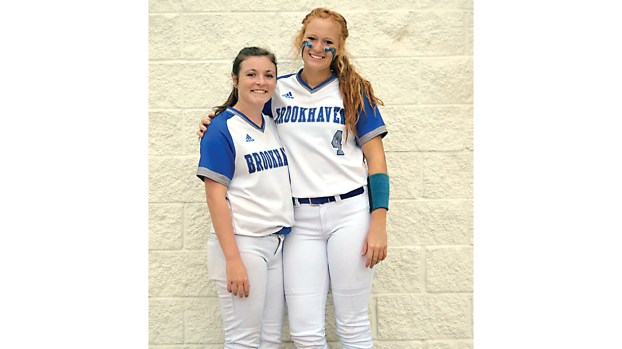 Photo by Gretchen Felder Brookhaven Academy seniors Kaylie Burgess and Hallie Creel were honored before their game Monday against Columbia Academy. Creel then had the game winning walk-off hit to beat Parklane on Tuesday. The Lady Cougars have one final home game remaining next Tuesday when they play Cathedral.

The Brookhaven Academy Lady Cougars (24-3-1) stayed hot on Tuesday by beating Parklane 5-4 at home. The win avenged a 6-5 loss to Parklane suffered by the Lady Cougars back on Aug. 6.

The win was the 15th straight for coach Becky Flowers and her crew with the last BA loss coming on Aug. 10 to Magnolia Heights. On Monday the Lady Cougars whipped Columbia Academy 12-0 and over the weekend BA went 3-0 in their own tournament.

In their tournament the Lady Cougars beat Simpson Academy 12-1, Tri-County 10-1 and Glenbrook 7-0.

Tuesday night Parklane went up 1-0 in the first and then 3-0 in the third inning. BA got on the board in the bottom of the third with a four-run frame.

Kaylie Burgess started the Brookhaven half of the inning off with a walk. Burgess moved to third after a Kensy Covington bunt was played for an error by PA. Both Covington and Burgees scored later in the inning on a double by sophomore Madison Moak.

Sophomore Abby Grace Richardson followed up Moak’s big hit with one of her own, a two-run home run to put BA up 4-3.

Parklane tied the game 4-4 in the top of the fourth and the score would stay there until the bottom of the seventh.

Richardson reached on a one-out single and then gained second on a Bailee Goodson fly ball that was misplayed for an error by Parklane.

Senior Hallie Creel then calmly stepped to the plate and ripped a game winning double that scored Richardson in walk-off fashion.

Felder drew the start in the circle and threw 63 pitches over four innings. She gave up four hits and four runs while striking out four and walking two. Junior Madi Smith picked up the win in relief. She went three innings and threw 42 pitches. Smith struck out five and walked two without giving up a hit.

Next week BA finishes its regular season with a trip to Oak Forest on Monday and a home game against Cathedral on Tuesday. The MAIS 4A South State Tournament then begins on Saturday in Magee. Last season BA won the AA south state championship.