BA Cougars on the road to Centreville Friday night 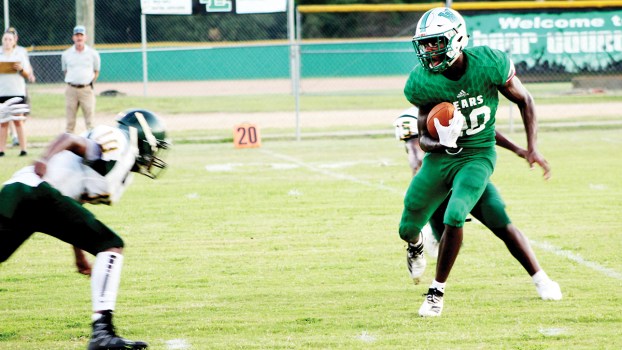 Photo by Cliff Furr West Lincoln junior Chris Freeman returns a punt against Salem in a Bears’ win earlier this season. WL hosts homecoming tonight as they welcome the Puckett Wolves to Perry Miller Field. All four Lincoln County Schools will play at home tonight, something that won’t happen again this season.

All four of the Lincoln County schools will play football at home tonight — a combination that will happen just once this season.

The tag line for the 1986 fantasy-adventure film “Highlander” was, “There can be only one.”

That’s also the theme for the Lincoln County Enterprise Yellow Jackets (1-2) tonight as they host the Enterprise Bulldogs (3-0) from Clarke County.

The Bulldogs are in the midst of a renaissance after finishing 1-11 last season under coach Kelly Jimmerson. Jimmerson and his team have won three straight games to start the 2019 season that began with a 32-21 win over Richton. The Bulldogs then beat winless Southeast Lauderdale 40-26 and squeezed perennial 1A contender Stringer 24-16 last week.

Freshman running back Kristian Milsap has been the difference maker for the Bulldogs as he’s rushed 54 times for 386 yards and seven touchdowns thus far this season. Junior John Campbell is averaging just under 100 yards per game rushing as well. Milsap rushed for 644 yards last year as an eighth grader.

The Enterprise Yellow Jackets (1-2) and coach Trey Woodard beat Salem 31-8 on their home field in the season opener before dropping back-to-back road games at Sebastopol (41-14) and Richton (21-7).

The EAC defense kept things close against Richton as Lawson Chemin and Brodie Harris grabbed an interception each. The Jackets have shown an ability to create turnovers three games into the season as they’ve forced a combined seven thus far.

Junior defensive lineman Josh Richardson was on fire against Richton as he racked up 12 tackles including four sacks.

The Richton defense kept EAC bottled up though as the lone Jacket score came on a 13-yard scoring pass from Donavin White to Tre Baker.

It’s homecoming in Flea Hop tonight as the Bears host the Puckett Wolves.

Puckett (1-2) will rely on the junior duo of quarterback Ty’vez Tate and junior quarterback Zay Taylor. Tate is a 5-foot-9 180-pound running back that plays QB. He’s also a leading tackler for the team as a safety. Taylor comes in at 6-foot and 205-pounds and is also very good as a middle linebacker.

Last season Puckett led 7-0 at halftime before a big second half by Tate and Taylor gave them a 28-6 win over WL in Rankin County.

The homecoming court presentation and crowning of the queen takes place at 6 p.m. followed by kickoff at 7 p.m. on Perry Miller Field.

Coach Brian Ford and his Hornets (1-2) finally make their return to Highway 550 and W.E. “Sambo” Smith Field after playing three straight road games to begin the season. The opponent in the home opener is the Pisgah Dragons.

The Hornets are coming off a 36-20 win at Salem. In the victory they got a career night from sophomore running back Versie Wilson. Wilson carried 16 times for 224 yards and two scores. He averaged 14 yards per carry against the Wildcat defense.

Junior Eric Birch made his return against Salem after being out of the first two games with an injury. Birch contributed four tackles for the LS defense. Sophomore Gavin Hooper is the lead tackler for the Hornets through three games with 25 total stops. Smith has also been a defensive standout thus far as he’s picked off a pair of passes, recovered two fumbles, and caused one fumble.

Pisgah (3-0) has wins over Puckett, Bogue Chitto, and St. Andrew’s to start the season. Last season the Dragons beat the Hornets 42-30 in Rankin County.

Kickoff on Smith Field is set for 7 p.m.

The Bobcats (2-1) and coach Gareth Sartin are back on Troy Smith Field for a second straight week as they host the Mize Bulldogs (3-0).

The duo of Shaw King and J.T. McCaffrey led the BC offense last week in their 23-20 win over Springfield High (Louisiana).

King finished 5-of-9 passing for 137 yards. McCaffrey rushed seven times for 94 yards. King ran the ball 13 times for 46 yards and two scores. Junior fullback Reid Smith also had a big game against Springfield as he carried eight times for 51 yards and one score.

Kickoff on Smith field is 7 p.m.