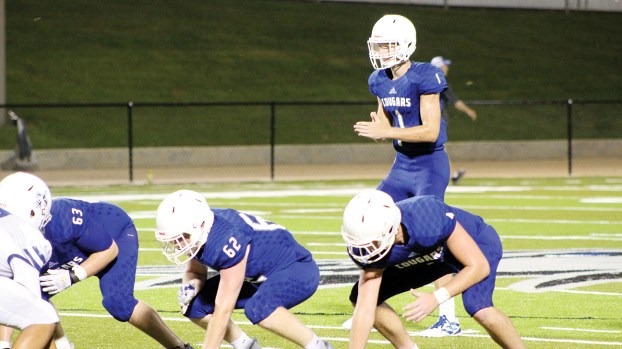 Daily Leader File Photo Brookhaven Academy is playing for first place in their district Friday night when they face the Riverfield Raiders. It’s the final district game of the season for Riverfield while BA still has to play River Oaks (1-6) and Hillcrest (1-6). Both teams have a win over Cathedral with BA beating the Green Wave 34-33 and Riverfield running away from Cathedral 65-38.

District championship to be decided Friday night at BA

If Brookhaven Academy (4-3) wants to win a district championship for a second straight season, the Cougars must defeat the unbeaten Riverfield Academy Raiders (7-0) Friday night on R.M. “Red” Stuard Field.

The Raiders hail from Rayville, Louisiana and have the ability to put points on the board. They average 50 points per game and have scored 60 or more points twice this season.

Riverfield is the only team to beat Tri-County Academy this season and did so in a 50-49 shootout. Last week RA beat Bayou Academy 54-12 and ran up 488 yards of total offense in the win.

Riverfield does much of their damage on the ground using a split-back veer offense. They’ll run an inside veer, a trap, power and a toss play. It’s not going to be complicated, but the Cougar defense will try to be the first team this season to slow it down.

Quarterback Garrett Breakfield can pass the ball and is also one of the leading rushers for the Raiders.

As good as RA is, it’s a nice change of pace for a BA team that’s been facing much larger competition for the last two weeks in Parklane and Adams County Christian School.

Last week in a 34-7 loss to ACCS the Cougars got on the board via a 4-yard TD run by John Rivers Brown. ACCS led 28-0 at halftime. Brown carried eight times for a team-high 42 yards.