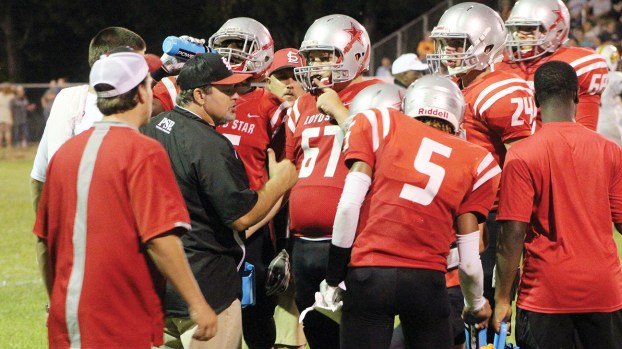 Photo by Cliff Furr Coach Brian Ford and his Loyd Star Hornets are back in region 7-2A action next week when they host the West Lincoln Bears on W. E. Sambo Smith Field.

Coach Brian Ford and his Hornets hung close in the first half as the teams traded scores. AC led 30-16 at halftime and looked like they’d go up three scores in the third quarter before the Trojans fumbled on the Loyd Star 1-yard line.

The Hornets picked up a pair of first downs after the AC fumble, but eventually punted the ball back to the home team. On the first play of the final quarter Amite County senior running back ShoShun Boss scored on a short run to put his team up by three scores.

In the first quarter Loyd Star got on the board when quarterback Stephen Mills hit Thomas Kelly for a 44-yard touchdown pass. Versie Wilson ran in the 2-point conversion.

Loyd Star is back at home Friday when the Hornets host West Lincoln.