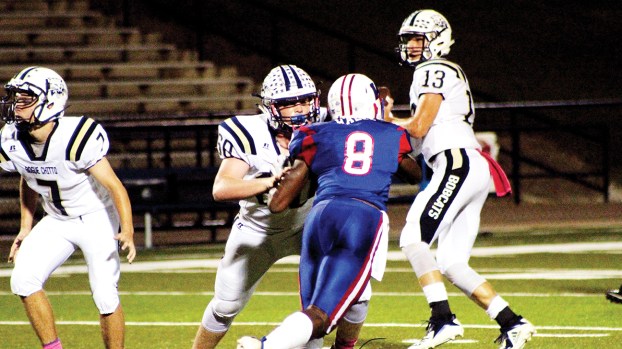 The game was moved up to Thursday from Friday due to a threat of rain and severe weather in the forecast. That didn’t stop the fans in attendance at Stone Stadium from getting wet early though as a line of showers moved through the area just before kickoff.

Bogue Chitto traditionally kicks the ball short for an onside try, which gives their opponents the ball at midfield. That’s exactly what happened as Wesson recovered the opening kickoff on its own 46-yard line.

The Cobras wasted no time in quickly marching down the field as freshman quarterback Will Loy hit junior receiver Antrelle Sims on an 11-yard touchdown pass to put Wesson up 7-0.

With a slight drizzle making things slick, Bogue Chitto fumbled the following kickoff and gave the ball right back to the Cobras. Wesson doesn’t use an onside kick like Bogue Chitto, but their kicker Jesse Brewer boots a low knuckle ball that’s often hard to handle when it lands between lines in the return team.

A pass interference-call in the end zone moved Wesson even closer as a 4-yard run by Orlando Smith put the Cobras up 14-0.

When the Bobcats finally got an offensive possession, it looked like the slick ball still gave them problems as senior receiver Zach Upkins had a long gain slide right out of his hands for an incompletion. BC then fumbled the ball to give it right back to Wesson.

On first down after the turnover freshman Tony Sanders took a jet-sweep 25-yards down to the Bogue Chitto red-zone for Wesson.

Loy then hit Anterio Miller on a 16-yard touchdown catch as Bogue Chitto had possessed the ball just once and trailed 20-0 with 10:40 left until halftime.

The Cobras added a 65-yard touchdown pass from Loy to Sims and another Orlando Smith touchdown run to go up 32-0 at halftime. Wesson had the ball inside the BC 10-yard line just before the break but let the clock expire without calling a timeout and adding another score.

Late in the second quarter Bogue Chitto began to have some success moving the ball via the pass as crossing receivers found a void in the WAC defense.

On the first play of the second half Bogue Chitto quarterback Shaw King hit junior Owen Anderson on a 62-yard touchdown pass to get the Cats on the board.

BC and coach Gareth Sartin were without junior Reid Smitha and senior Lincoln Collins as both wore street clothes on the sideline. During the first half they also lost two key pieces in J.T. McCaffrey and Tristan Buffington to injuries.

The second Bogue Chitto score of the night was set up by a nice kickoff return from Caleb Avants. King connected with Upkins on a juggling-catch as the senior showed great concentration to secure the ball against Wesson defensive back Damien Smith.

Other than those two drives, the Wesson defense didn’t give up much as the Cobras were a mass of blue-clad blurs running to the football. BC gained just 15 yards on the ground.

Senior linebacker Scott Hutt is the heart of the defense in the middle, but juniors Jason Smith and Terrance Haley along with sophomore Collin McGowen are always around the ball for Wesson. Sophomore Justin Beall is a solid plug of a defensive tackle alongside lanky senior Ethan Ainsworth.

A day after being named The Daily Leader Offensive Player of the Week Loy again topped his career high by going 17-of-19 for 342 yards and four scores.

After going from the hunted in a loaded 3A region last season — Seminary won the division and played for the state title — coach Jeremy Loy and his snakes are now the hunters. His goal is to keep his team focused and improving as they head towards the playoffs.

“Stay humble and hungry, that’s what we keep telling them,” said Loy. “We’ve had to learn what it’s like to wear the target on our backs after being the little fish in a big pond for the last few years.”

The Cobras have another Thursday night game on their schedule next week as they host Amite County (4-4, 2-0) in a matchup of the two division leaders. Bogue Chitto is back at home next Friday on Troy Smith field hosting Enterprise.