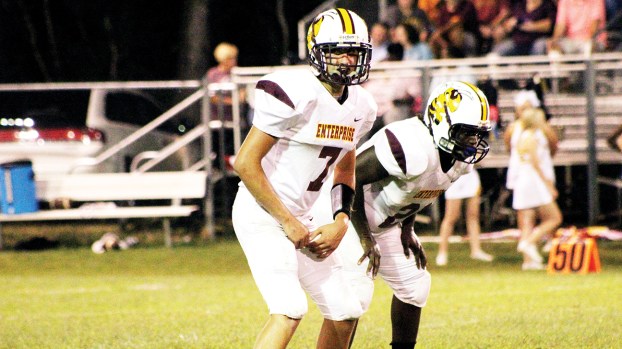 Photo by Cliff Furr Enterprise quarterback Lawson Chemin and running back Dylan Vaughn saw their team rush for nearly 300 yards Friday against Bogue Chitto. The Bobcats made the most of EAC turnovers in grabbing a 35-18 win. EAC is on the road next week as they travel to face Amite County.

The Bogue Chitto Bobcats (3-6, 1-2) hosted their county rivals — the Enterprise Yellow Jackets (1-8, 0-3) Friday night on Troy Smith Field. The Bobcats used turnovers and a strong offensive showing to take a 35-18 win in the Region 7-2A matchup.

The Bobcats first found the end zone when QB Shaw King ran in from the 3-yard line. Enterprise answered later in the first quarter with a field goal by Colby Beard to cut the lead to 7-3.

Later in the quarter Colton Bales of BC recovered a fumble that set up a 30-yard scoring run by Reid Smith to put the Cats up 14-3.

Again, it was the Bobcat defense making the most out of turnovers when they forced another fumble. That set up a King to J.T. McCaffrey touchdown pass that went for 25-yards. The Carson Price point after kick was good and BC led 21-3 with 10:28 until halftime.

With 4:10 left until the break Edrick McCray of Enterprise scored to pull his team within 21-10.

BC wasn’t finished though and with just 17 second remaining in the half Zach Upkins reeled in a 15-yard TD catch.

In the second half the Bobcats defense stepped up with an interception by Upkins to stop an Enterprise offensive drive.

The Bobcats didn’t find the end zone again until the fourth quarter when Bales scored on a 3-yard reception.

The final EAC score of the night came on a Dylan Vaughn run.

“Offensively we had a good game,” said BC coach Gareth Sartin. “Defensively we gave up some yards in the first half, but we were able to get some turnovers in the ballgame to help us out.”

Offensively for the Bobcats King finished 6-of-12 with 68 yards passing. Anderson had eight carries for 81 yards. King had seven carries for 28 yards. Smith had five carries for 38 yards. McCaffrey had four carries for 21 yards.

Next up for the Bobcats is a game at West Lincoln while the Yellow Jackets travel to Liberty to face Amite County.