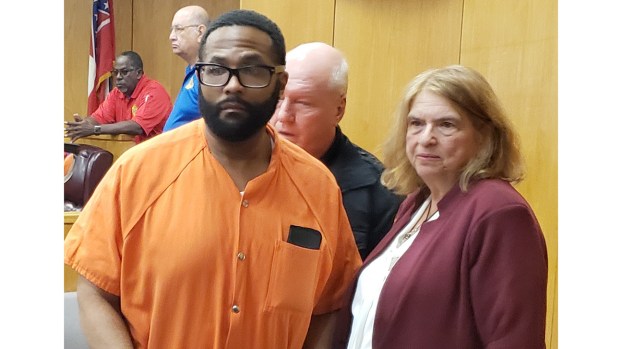 Judge to decide trial date this week for Godbolt

A Lincoln County Circuit Court judge will decide this week if the capital murder trial of Willie Cory Godbolt will be pushed past February.

A DeSoto County jury will hear the case. In February of this year, Judge David Strong set the trial for Feb. 10, 2020. On Tuesday, the state and Godbolt’s defense team argued over delaying the trial a few months.

Godbolt, 37, who is accused of killing eight people in May 2017, sat quietly in the Lincoln County courtroom during the 30-minute hearing that was also attended by several members of the victims’ families. He is being held without bond in the Copiah County Jail.

Allison Steiner, who is with the capital defense counsel division of the state public defender’s office, asked for Godbolt’s trial to be continued for six months.

When the trial date was set Lincoln County Public Defender Jason Tate was part of the defense team along with Allison Poor with the state public defender’s office. Poor, who recently had a baby, is on maternity leave. Tate left the county public defender’s office in July. Steiner said Tate’s departure leaves them unable to prepare adequately with a team that has the experience and training required by the Mississippi Rules of Criminal Procedure, despite Hazlehurst attorney M.A. Bass joining the defense team in August as third chair.

Godbolt, an indigent defendant, must be appointed a defense team capable of providing effective representation consistent with the guidelines for such representation, she said.

“I cannot have that team ready,” she said. “It is simply not going to be reasonably possible to have an effective representation on this case in February.”

She indicated that if the date isn’t changed, an appeals court will likely agree that she was not ready and find error.

“I think the court will be trying this again,” she said.

Steiner also asked Strong to appoint attorney Thomas Fortner as second-chair defense counsel and for Bass to remain as co-counsel at third chair.

However, Fortner, while qualified as a capital defense attorney, doesn’t have adequate time to prepare for a February trial, she said. Fortner, who has a private practice in Hattiesburg, is involved in four death penalty cases as either lead or co-counsel, trials in two non-death penalty homicide cases and has obligations with his law practice.

Assistant District Attorney Robert Byrd spoke for the prosecution. He was joined by District Attorney Dee Bates and assistant district attorneys Brendon Adams and Rodney Tidwell, though none of them spoke during the hearing.

Byrd said Steiner meets the requirements of the Mississippi Rules of Criminal Procedure and so does Bass now that he recently received training.

Byrd said there are three months remaining before the set trial date.

“This court has gone overboard to protect the rights of the defendant as we should, however the state of Mississippi also has rights, the victims in this case have rights to have this case heard in a timely manner,” he said. “Any undue delay is not merited at this point in time, particularly if you’re talking about six months.”

Byrd said April or May is still not fair to the victims in the case, but it would be reasonable. Six months or longer is not practical, he said.

Bass suggested Godbolt deserves a team that is better than OK.

“Not that we aren’t qualified attorneys to handle it, but OK as to being prepared and that’s the main issue here, judge, is being prepared. Not just whether we’re qualified, but whether we are prepared,” he said.

Bass said he understands the victims in the situation and their grief, but February is “a little too soon to be adequately prepared and we do need additional time for preparation.”

Strong plans to talk to the Desoto County circuit clerk before he makes a decision. He expects to announce his determination later this week.

He did not appoint Fortner as counsel. Strong said he will likely determine what the court date will be and if Fortner is available, the court will consider appointing him at that time.