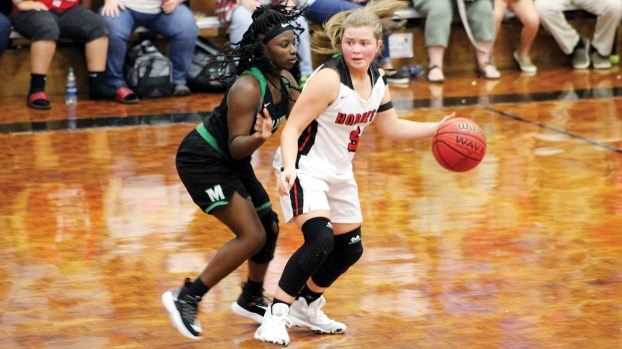 Photo by Cliff Furr Loyd Star senior guard Carly Beth Wallace works against the pressure of Tyshyia Frazier of McLaurin Tuesday night. Wallace scorched the nets with 29 points in leading the Lady Hornets to a 69-33 win.

Wallace goes off for 29 in LS opening night win

What’s old is new again at Loyd Star as the Lady Hornets kicked their season off with a more than familiar face on the sideline Tuesday night against McLaurin.

Longtime Hornet basketball coach Gene “Moochie” Britt is once again leading the girls’ program after coming off what was only a one-year retirement.

Tuesday night senior Carly Beth Wallace was on fire from the field as she rang up 29 points in an eventual 69-33 win for the Lady Hornets.

Britt had been previously coaching boys and girls at the school before retiring after the 2017-2018 season. He’s back on Highway 550 to replace former coach Christi Terrell who stepped down after leading the Lady Hornets for one season.

A MAIS Hall of Fame member from his days of coaching at Brookhaven Academy, Britt battled severe health issues prior to hanging his clipboard up.

Tuesday night he looked fit, healthy and happy as the results had him smiling big after addressing his team in the locker room.

“I was really pleased with how the girls played,” said Britt. “We’ve been working on getting the ball into our fast break and secondary break and tonight that was working well. That led to Carly Beth getting open shots and she knocked them down.”

McLaurin had trouble finding Wallace in transition all night and the returning starter scored 13 points in the first quarter as LS sprinted out to a 22-8 lead. The halftime deficit was 44-22 as Britt was able to sub liberally in the second half.

Wallace and fellow senior Taylor Smith were the two most experienced players on the court for the Lady Hornets Tuesday night. Sophomore point guard Aubrey Britt dressed but didn’t play as she prepared to defend her state cross-country title Wednesday in Jackson.

Aubrey Britt was replaced in the starting lineup by freshman point guard Carson Hughey. Hughey did most of the ball handling and scored seven points.

Senior Ta’Maria Townsend also drew a start on the wing after coming off the bench last season as a junior. Townsend scored three points. Senior Kelsey Foster was another player stepping up and into the starting lineup as she scored two points for the Lady Hornets.

Junior Marleigh Bullock is also another experienced guard for Britt and she scored seven points off the bench on Tuesday. Wallace stuffed the stat line with five rebounds, four steals and four assists. Foster pulled down seven rebounds and Smith chipped in five rebounds for LS.

Other scorers for Loyd Star were Balee Zumbro with three points and Myla Harvey with four points. Calilia Beard, Alyssa Leggett, Madison Falvey and Emma Falvey all scored two points each for the Lady Hornets.

Loyd Star only had two seniors on their team last season in Christie Patterson and Sarah Britt. Britt was the leading scorer on the team and was the focal point of a team that was at their best in the half court.

Coach Britt likes the amount of depth he has with the returnees and younger players on the team. He plans to use a 1-3-1 zone defense to trap and speed teams up offensively. Former Lady Hornet Laura Britt McKay serves as his assistant and as she has done for many, many years — his wife Margaret keeps the book for the team.

“I’m enjoying this group,” said Britt. “If they’ll keep playing as hard as they can and do the things I’m asking them to I think we’ll have a hard-nosed team that will give people problems.”