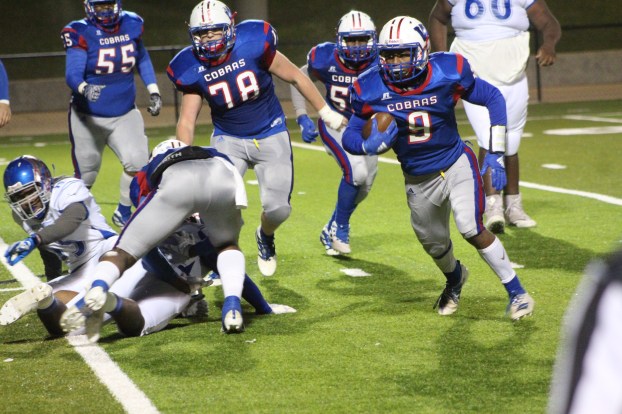 Photo by Cliff Furr Wesson junior Terrance Haley carries the ball in overtime for the Cobras against North Forrest. On the next play junior Orlando Smith would sprint in with the game winning score in a 20-14 Wesson double overtime win.

Wesson coach Jeremy Loy saw something he didn’t like on his sideline in the first half Friday night. The Cobras (8-4) were locked in a fight as they took on North Forrest (3-8) in a MHSAA 2A opening round playoff matchup.

Loy thought he saw the look of defeat creep in as his team lacked juice and the Cobras trailed 14-7 deep into the second half.

“The second quarter was awful for us and we were lucky to only be down 14-7 at halftime,” said Loy. “We got that look in our eye that I haven’t seen in a long time, we looked shocked.”

The Cobras came alive late though, led by defense that turned back NF time and time again to secure a 20-14 double overtime victory.

Wesson will host Enterprise-Clarke (10-1) next Friday in Stone Stadium.

The win was secured when junior running back Orlando Smith burst through the Eagle defensive line for an 8-yard touchdown run on the second play of the second extra period.

The Wesson defense had just shut the door on North Forrest and stopped a fourth down attempt that gave their team another chance to win the game.

In the first overtime Wesson went for it on fourth-and-goal from the 3-yard line but Smith would be stopped by the Eagles. North Forrest then made it to the 3-yard line. The Eagles, who had not attempted an extra-point in the game, decided to try a field goal to win it.

The field goal attempt had the Eagles scrambling to get set up as a 300-pound offensive lineman tried to boot the ball through the uprights. Wesson senior linebacker Scott Hutt easily broke through the line to block the kick and force the second OT.

A Will Loy to Antrelle Sims pass for a long gain sparked the Wesson offense in the fourth quarter. On the next play Loy hit Damien Smith for a 22-yard touchdown pass that tied the game at 14-14.

Wesson has relied on a vertical passing game all season to break big plays. Friday the North Forrest pressure took some of that away.

“They’ve got a strong defense and they put a lot of pressure on us,” said Loy. “They held East Marion to eight points and were only giving up 13 points per game.”

After the tying score the Wesson defense forced another three and out and it looked like the Cobras might run down for a winning score in regulation.

With 41 seconds remaining a scrambling Will Loy dropped the ball and it was picked up by NF and returned to the Wesson 22-yard line.

The Cobra defense returned the favor though as Sims picked off a pass that preserved the tie and forced overtime.

Sims, a huge piece for the Wesson offense and defense, had a banged-up shoulder that limited him.

“I got hurt on the second play of the game, but I wasn’t about to come out and let my team down,” said Sims.

The play on which Sims was injured was a long pass on the opening drive that saw him knocked out at the 1-yard line. Smith scored on a plunge after that and Wesson led 7-0.

It appeared they’d easily score on the next drive, but a Damien Smith catch on the 5-yard line was ruled to be an incompletion. Penalties and a sack then moved the ball back as the Cobras gave the ball over on downs.

Wesson then had a series of possessions that ended in short punts or turnovers as North Forest tied the game and then took a 14-7 lead. The visitors from Eatonville only dressed 21 players but had some dynamic playmakers in sophomores Tyrell Pollard and John Weathersby Jr.

What was the ultimate undoing of North Forrest was the yellow hanky. If you laid out every pre-snap penalty the Eagles had in the game from end-to-end it would have reached from Wesson to Beauregard and back again.

The win was the first playoff victory for the Cobras since the 2010 team beat Newton 42-8 in their opener. For Loy it’s another check off on the goals for his team.

“We wanted to host a playoff game and we wanted to win a playoff game,” said Loy. “Now we get a chance to regroup and get ready to face good Enterprise team. My guys are excited for the challenge.”