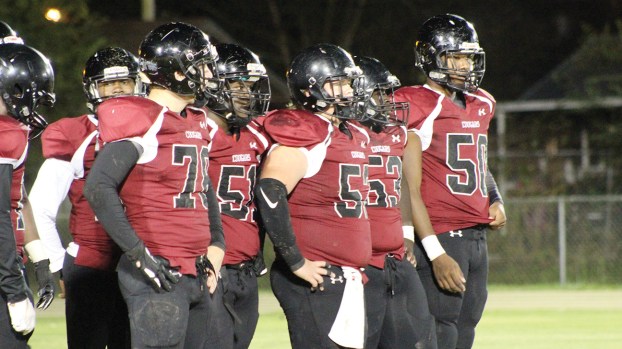 Photo by Cliff Furr The Lawrence County offensive line has paved the way for a combined 4,081 rushing yards this season for the Cougars. Tonight Lawrence County faces a team that also likes to run the ball in Newton County. Kickoff of their MHSAA 4A South State semifinal is set for 7 p.m.

On paper it looks like the Lawrence County Cougars (8-5) will meet their mirror image in Newton County (8-5) Friday night in Decatur for a MHSAA third round matchup.

Both teams finished third in their division and won a road playoff game in the opening round against a higher seed. LC blew out Mendenhall 55-19 in their opener while Newton County went to Lanier and beat a tough Bulldog team 18-14.

Many thought the schools would actually end up matching up in the first round before LC dropped to the third seed following a 22-6 loss to Lanier in their regular season finale.

Last week, Lawrence County moved on in exciting fashion as Eduardo Del Angel kicked a 39-yard field goal as time expired to give the Cougars a 17-14 win over Greene County.

In their second-round game, Newton County also won in close fashion, defeating Moss Point 29-22. The Cougars from Decatur didn’t clinch the victory until getting a fourth-quarter score.

Like Jesse Anderson at Lawrence County, Newton County coach Bobby Bass is in the second year of leading his program.

Bass went to NC after serving as the defensive coordinator at Brookhaven High. Last year his inaugural team finished 2-9.

This season, Newton County is riding the legs of junior running back Carlois Walker. Playing in only 10 games this season, Walker has piled up 1,657 rushing yards with 20 touchdowns.

Walker rushed for 187 yards and two scores against Lanier and 129 and a pair of TDs last week against Moss Point.

LC also has one of the best rushers in the state in senior Kylan Cooper who has gone for 1,941 yards and 23 scores this season. The Cougars beat Greene County despite Cooper missing much of the action with a lower body injury.

Kickoff in Decatur is set for 7 p.m.