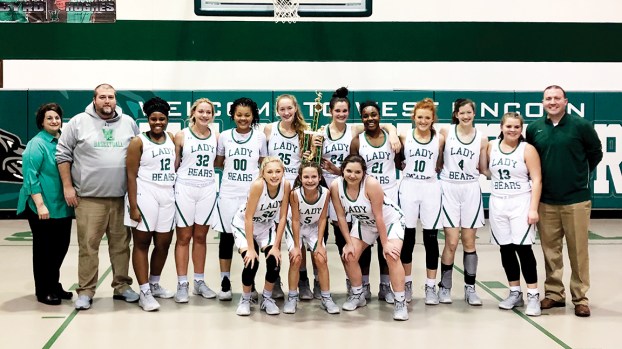 “We had a great week — we’re gelling and starting to come together.”

Those were the words of West Lincoln head coach Brooks Smith after his Lady Bears capped a 3-0 week at the Lincoln County Tournament by beating Enterprise 72-35 Friday night in Jack Case Gymnasium.

The Lady Bears came into the week 0-4 on the season but beat Loyd Star by four points on Tuesday and Bogue Chitto by 31 Thursday night before meeting Enterprise.

Last season the Lady Bears went 10-1 against their county rivals on the way to a 26-6 record and a runner up finish in the MHSAA 2A state tournament. Smith lost six seniors to graduation including four starters from that team.

Returnees this year are led by senior forward Bailey Wilson who averaged 9.1 points and 5.2 rebounds per game last year and junior Brittany Sturkey who added 9.8 points and 4.1 boards per night as the top reserve last season.

Friday night Sturkey scored 16 and grabbed seven rebounds while Wilson added 16 points. Those two are joined in the starting lineup by junior Mya Brown and senior Paige Shedd, a pair of players transitioning into starting roles after being subs last season.

Wilson is the tallest player on the court for WL but her ability to shoot the ball allows Smith to let her operate away from the basket. Sturkey plays the slasher role while Shedd and Brown work in the paint.

The play of freshman point guard Kara Beth Addison is crucial for WL as she triggers the offense with her ability to get into the lane. Addison was a big part of a West Lincoln junior high team that finished unbeaten last season.

In the early game Friday Bogue Chitto built on a one-point halftime lead in taking care of Loyd Star 51-39.

The BC defense clamped down and allowed Loyd Star to score only two points in the third quarter.

A put-back by sophomore guard Aubrey Britt pulled Loyd Star within 38-37 late in the game but the Lady Hornets could get no closer.

Soon after that Loyd Star coach Gene “Moochie” Britt was ejected from the game. Britt — who was hoarse and weak-voiced from being sick — was calling for a timeout that the official didn’t hear.

Things got worse when Aubrey Britt hit her head on the floor soon after and was woozy getting up off the court to be escorted to the locker room.

Bogue Chitto coach Robbie Walters wasn’t happy with how his team played the night before in their loss to West Lincoln.

“I told them that playing hard was what mattered the most to me,” said Walters. “More than winning and losing, I wanted to see better effort, and we had that tonight.”

Kamilah Clay scored 13 for BC in the win. Clay, DeAnna Edwards, Katelynn Palmer, Anna Brumfield and Kayci Beth Wallace are an experienced core of returnees for Walters.

The Lady Cats were 20-10 in Walter’s first season at BC last year. The graduation of Karly Leake and Cheyenne Hall was the biggest loss for Bogue Chitto as that pair did a a majority of the ball handling for the team last season.

Walters says he’s pleased so far with the job his team has had as they transition some new players into different roles.

“We’re off to a good start overall this season,” said Walters. “The girls know what I expect from them and what we’re trying to do. Tonight, they responded like I knew we would.”