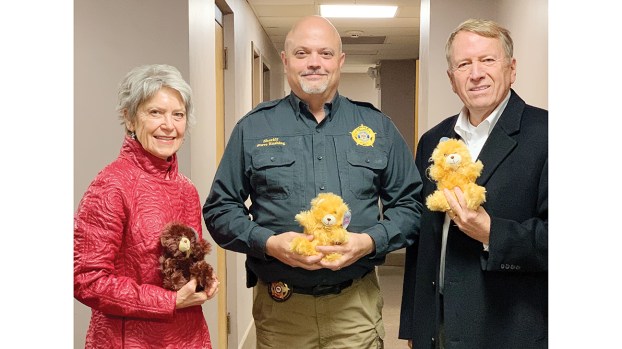 For decades, Patti Perkins has been collecting stuffed bears — but not for herself. She collects them for first responders like the Brookhaven Police Department, Lincoln County Sheriff’s Office and EMS to give to children facing a crisis.

The idea to get involved in collecting comfort bears began as a thank-you. Her neighbor at the time was a fire marshal, and her children took babysitting classes through her local fire department. Those classes saved her daughter’s life when her son performed the Heimlich maneuver.

The Perkins family returned to the fire department to thank them for their training. As they continued to become friends with the department, they learned more about how the comfort bears would help children in a crisis. Perkins, eager to give back to the firemen whose training had saved her daughter’s life, started helping out with the project.

“It was just kind of a small little thing that we would do,” Perkins sad.

That small little thing didn’t leave Perkins’ heart after she moved to Brookhaven in late January of 1992. There was no comfort bear program in Brookhaven at that time, and so before the end of the year, she had started her own program.

“The very first bear, Officer Bobby Bell was called to the scene of a 17-year-old rape victim,” she said. “She had been traumatized, and a male policeman and two male ambulance attendants came to help her. She was not going to get into the ambulance with all these men around.”

Perkins said the bear worked, and EMS was able to transport the girl to the hospital. She is far from the only child to whom the bears have brought comfort. Over the years, The Daily Leader has run stories with photos of children holding bears given to them by local first responders.

The bears have even made it all the way to Afghanistan, where American troops passed out the stuffed animals to children traumatized by war.

What started out as a small thing Perkins would do to thank her local fire department in San Francisco has grown into something dear to her heart. Over the years, she said she has purchased nearly 2,000 bears. Perkins said she tries to give bears out at least twice a year — more, if money allows.

Money for the bears comes from local service organizations. For years, the Lions Club helped Perkins run the project, but this year she has joined the Rotary Club, which has taken on the project as its own.