It’s the end of an era for county school… 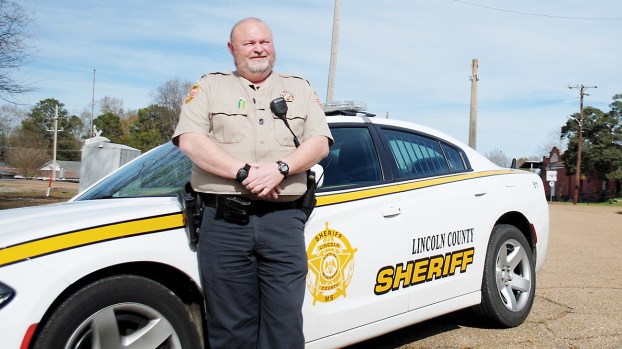 Photo by Aaron Paden Deputy James “Tommy” Gibson poses for a photo Tuesday between calls after taking over Christmas Eve for a fellow deputy to allow him to celebrate the holiday with his young children.

Deputy James Thomas Gibson of the Lincoln County Sheriff’s Office is just one of many people throughout the county who dedicates their time over the holidays to public service.

“I’ve always worked in public service,” Gibson said. “When I got out of high school, I went to work for King’s Daughters (Medical Center) as an EMS driver.”

Gibson has been in law enforcement since 1993. He was one of the county’s first 911 dispatch operators. Eventually, he moved to dispatch for Brookhaven, and from there he went out on patrol for the Brookhaven Police Department. BPD Capt. Clint Earls has been a good friend of Gibson’s since his days as an ambulance driver.

Gibson has been working for the LCSO since 2012. But no matter what department, law enforcement is a non-stop job. Gibson said officers don’t alternate schedules because it’s a holiday. They work whatever day they’re scheduled for. But Gibson said people in the department look out for each other.

“This is not a scheduled shift for me,” Gibson said, while working on Christmas Eve. “Some other deputy needed to be off for his family or for a trip, and I volunteered to work on Christmas Eve.”

Gibson was scheduled to work on Christmas Day and New Year’s Eve as well, from 6 p.m. until 6 a.m. Gibson said that while nobody wants to work on the holidays, he is more than happy to take over for another deputy who has young children so they can celebrate the day together.

Gibson is married to Vickie Gibson and has two children, Erin and Peyton.

“My children are grown,” he said. “My youngest, Peyton, is 18. So, I would volunteer to work on Christmas to allow those who have children to be off for their young kids. People did that for me when my kids were younger. Those of us that don’t have kids try to help out those that do, so they can be off for Christmas morning.”

And working in law enforcement for the holidays isn’t light work. In the lead-up to Christmas, officers have to worry about theft as everyone scrambles to purchase their last-minute gifts.

For Christmas Day and New Year’s Eve, Gibson said family disturbances rule the day. When you get that many people together — especially when alcohol is involved — disagreements are inevitable, he said.

Gibson said even though he won’t be spending Christmas this year with family, the sheriff’s department is like a second family for him. He is also moved by the support of the community.

“We get tremendous support from the local businesses, and even the residents,” he said. “Just this morning, a family brought some homemade cookies and brownies to the sheriff’s office.”