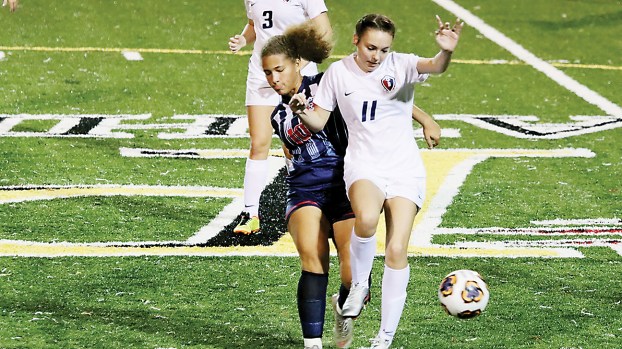 Photo by Terri Mabile Brookhaven High sophomore Mary Francis Taylor battles for possession with a player from Forest Hill earlier this season. BHS hosts South Jones tonight on King Field for a MHSAA 5A first round playoff game that kicks off at 6 p.m.

The Brookhaven High Lady Panthers (13-6) are the lone area team hosting a playoff match tonight as they welcome South Jones to King Field for a 6 p.m. matchup.

This season was a fifth straight one in which BHS finished perfect in Region 6-5A play. They were dominant in outscoring Forest Hill, Natchez and Wingfield by a combined 29-1.

South Jones and coach Acie Hamilton are 10-6-1 and were runners-up in Region 5-5A behind West Jones.

As it has since she joined the varsity team, the BHS offense goes through Madi Miller. The senior striker has scored a team best 32 goals this season.

Senior goalkeeper Maddie Brabham has been a stalwart between the pipes this season for longtime BHS coach Keven Bower.

Juniors Taylor Levy and Morgan Moak are two experienced underclassmen that are vital to the middle and back of the BHS defensive line — as is sophomore Layla Woodall.

Sophomores Mary Taylor Francis and Leyton Roberson are also a pair of younger players that have seen plenty of action this season. Seventh grader Caroline Kilpatrick is one of the best offensive threats on the team in her first season of varsity play.

The playoffs have historically been tough sledding for BHS as the closest they’ve come to postseason victory was an overtime loss to Long Beach in 2016.

Bower says South Jones presents a challenge for his side.

“We’ve got to stay focused,” said Bower. “We’ll need to work hard and try to take advantage of any counter-attacks we get. Solid defense is going to be the key against a strong team like South Jones.”