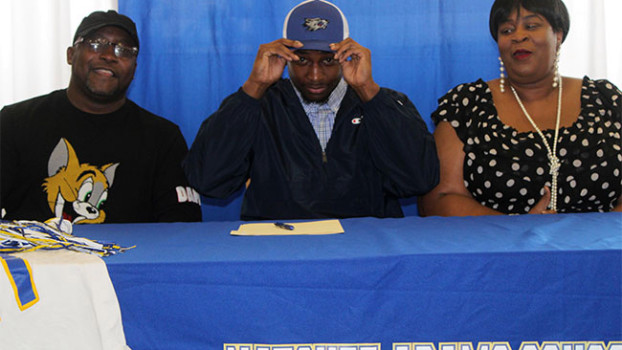 Photo by Patrick Murphy Natchez High senior athlete James Singleton puts on a Co-Lin hat after signing with the Wolves Wednesday. Co-Lin head coach Glenn Davis expects to have a 24-25 man class when the final letter-of-intent are received for his 2020 recruits.

Signing day in the books for class of 2020

Signing day for future college football players took place on Wednesday, but you may or may not have noticed.

The early signing period that takes place in December has pulled some of the shine from what happens in February.

Most schools are nearly done with their class, so the day doesn’t get the same attention it once did nationally.

There was a time when programs had a camera trained on their fax machines as a live feed showed letter-of-intents rolling in on the February date. It was the one day that fax machines got to shine after being eclipsed by email for so long.

A lot of that pomp and circumstance still happens, it just takes place during the early signing period.

When Mississippi State was announcing their class in December then head coach Joe Moorhead hopped on Facetime with each signee as the media watched.

Davis and his staff battle to add another quality class

The day is still of the utmost importance for the community college football programs around the state though. Their signing day will usually see them inking nearly 50 percent of their next team.

Copiah-Lincoln coach Glenn Davis and his staff have been working tirelessly to put together their 2020 class.

“You always have positions that you want to add some length or size at certain spots and I think we got that accomplished,” said Davis. “It’s an arms race in our league when it comes to recruiting though and you’ve got to battle for every kid you sign.”

The number of hours that JUCO coaches put into recruiting is staggering.

The NCAA has over 700 employees and a rule book that’s twice the size of the Gutenberg Bible. You can commit an NCAA violation by just breathing wrong. They set forth a litany of rules governing when and where college football coaches can see and speak with recruits.

The NJCAA that governs two-year schools is based out of Charlotte, North Carolina and has a full-time staff just a fraction of what the NCAA employs in Indianapolis.

There is very little capping how, when and where JUCO coaches can recruit. Mississippi schools can have 55 players on their active roster with 10 practice squad players that are redshirts.

Only eight players on that roster can be from outside the state of Mississippi, though.

That means each of the 14 football playing Mississippi community colleges needs 47 student-athletes from in-state on their roster each season — leaving 658 total positions that need to be filled.

Some guys make a team after being spotted in a try-out, but much of the work is done by the assistant coaches of the league who scour the state for talent.

Junior college coaches don’t drop in via private jet to check in on recruits like their SEC counterparts. They drive minivans and four-door sedans marked with their school’s logo. They see their family very little and survive on energy drinks and drive through dinners.

Co-Lin signed a good one out of Natchez High in quarterback James Singleton. Singleton is a weapon that can be used in a variety of spots by the CLCC offensive staff. At 6-foot-5, 205 pounds he’s blessed with great speed and quickness and will move to wideout next season.

The Wolves signed another talented high school QB that will make a dangerous receiver in Dontavious Turner of South Pike. Turner also signed with Southern Miss on Wednesday, but if he doesn’t end up in the Hub City he’ll be catching balls next year in Wesson.

Defensive lineman KaDarius Miller is a full-grown man from South Pike that signed with the Wolves, as well. The 6-foot-2, 270-pound Miller made a team-high 21 tackles for a loss on a 13-1 team.

South Pike had a signing day ceremony Wednesday where eight of their players signed letters-of-intent.

Similar ceremonies were held all around the country and some of them make the national news for more dubious reasons.

Not all letters-of-intent are created equal

It usually happens every year — a young man signs a letter-of-intent in a packed auditorium, library or gym and puts on a baseball cap representing the school he’ll next attend.

Later it’s revealed that the school that he “signed” with didn’t actually offer a scholarship. Sometimes they haven’t even heard of the player before.

Wednesday a similar scenario got national publicity and it involved Ole Miss.

A receiver from northern Louisiana had a signing day ceremony pledging to join the Rebels. Later the news came out that Ole Miss had once been recruiting him but had recently pulled their offer when another receiver gave them a verbal commitment.

The young man that staged the faux ceremony still has several offers to choose from, including another SEC program so it looks like things will work out better for him than most.

On signing day in 2015 I got to see the same thing firsthand while working in the sports information department at Co-Lin.

Then CLCC assistant coaches Dan Reich and Otis Yelverton were posted by the fax machine in student services watching the LOIs roll in.

A Twitter search of “Co-Lin signed” would return pictures of student-athletes signing from around the state that day and I’d then retweet them from the athletics account.

One of the results was a defensive lineman in south Louisiana. He had a white cake with blue script icing that spelled out Co-Lin as he signed a piece of paper surrounded by people in his school’s gym.

When Reich saw the picture his reply was, “I’ve never seen that guy in my life.” He called the other coaches to confirm that no offer had been given.

The news cameras in the gym nor the local paper knew any of that. They just knew what the student-athlete had told them.

After the ink dries, recruiting stars no longer matter

Signing day has always been a time for fans to freak out — in a good or bad way — depending on how many highly rated players their school signs.

Once the faxes have been sent though, all that stuff really only matters to the fans or the media that makes their living off ranking players.

The future greats will outwork everyone around them, regardless of if they were a 4-star or no-star recruit.

When I look back on that 2015 Co-Lin class I see some guys that were highly rated out of high school. The Wolves signed two players that also inked with SEC schools at the same time — Brookhaven High linebacker Leo Lewis being one of them.

There was one name of the 27 that jumped out a little more to me — wide receiver Alexander Hollins from Yazoo County.

Hollins played two years in Wesson and then two more at Eastern Illinois University in Charleston, Illinois. Then he signed with the Minnesota Vikings as an undrafted free agent last year.

When you open his 247Sport recruiting profile it has no offers listed and no stars beside his name.

When you open his Minnesota Vikings profile it tells you he spent the first two quarters of the season on the practice squad last year before being moved up to the active roster.

He finished the year with two catches for 46 yards in five games and even drew a start as an NFL rookie.

I guess signing day is a lot like life when you think about it.

You can fake it and have the cake and cameras when you know that things aren’t really as they appear.

Or you can put your nose down, put the work and see your dreams come true.

Cliff Furr is the sports editor at The Daily Leader. He can be reached at sports@dailyleader.com.