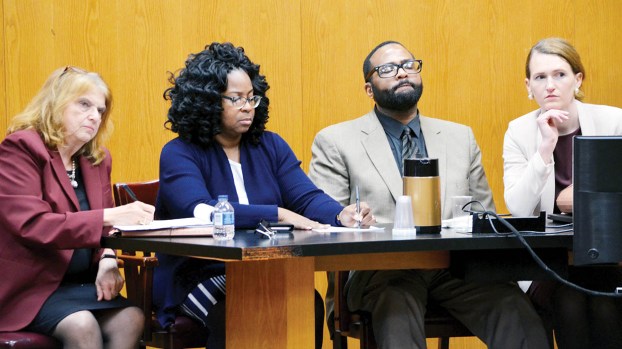 Photo by Donna Campbell/The Daily Leader Defendant Cory Godbolt hears the jury’s verdict of guilty on all 12 counts Tuesday on Day 10 of his capital murder trial at the Pike County Courthouse in Magnolia. The jury deliberated for just over two and a half hours. Pictured are, from left: Defense attorney Alsion Steiner, mitigation specialist Lela Hubbard, Godbolt and defense attorney Katherine Poor.

After 10 days of testimony in the capital murder trial of a Bogue Chitto man prosecutors say “slaughtered eight people out of love” in 2017, the DeSoto County jury deliberated over a lunch of beef brisket and came back just over two and half hours later with guilty verdicts in all 12 counts against him.

The jury of nine white women, two black women and one white man found 37-year-old Cory Godbolt guilty on four counts of capital murder in the deaths of Lincoln County Sheriff’s deputy William Durr, Austin Edwards, Jordan Blackwell and Sheila Burage; four counts of murder in the deaths of Brenda May, Toccara May, Barbara Mitchell and Ferral Burage; one count of attempted murder on deputy Timothy Kees who arrived at the Lee Drive address and testified he exchanged gunfire with the defendant; two counts of kidnapping — LaPeatra Stafford, who was forced to take Godbolt to Coopertown Road, and Xavier Lilly, who was forced to take Godbolt to East Lincoln Road — and one count of armed robbery for taking a car at gunpoint from Alfred Bracey and Henry Bracey, which was the personal property of Wykeshia Johnson.

Circuit Judge David Strong honored Godbolt’s request Tuesday to use the first 15 minutes of his attorney’s 90-minute closing arguments to address the jurors.

Standing before them in a suit and tie looking more like an attorney than a man accused of killing his wife’s family and a peace officer, Godbolt talked in third person about the shootings on Lee Drive, Coopertown Road and East Lincoln Road in May 2017.

Godbolt said he tried to help people fight their battles, and that people have said he was the aggressor, “that I was angry, that I was often upset. But you can tell, people who’re testifying [about] love. You don’t love an angry man. You don’t have a courtship for 10 years and a marriage for seven with a man as heinous and cruel as I’ve been portrayed. I hurt. But I didn’t want today to pass without you all to know, and them as well, what happened, what transpired that night, it was not a fruit from my heart, but a fruit from my mind.”

He said the events did not occur in an effort to control his wife.

“I absolutely to this day, with all my heart, adore Sheena May Godbolt,” he said.

Godbolt filed for divorce from the defendant in November and asked to be called Sheena May during testimony.

The defense has pointed to Godbolt’s taped confession saying Durr’s death was not in his plan as proof that the murders were intentional. During his 15-minute monologue, Godbolt described his plan differently.

“I had a plan. I married the woman I loved, who birthed my children. I lived in a community that is love, but in a godly way, and well-led,” he said.

Godbolt admitted he did not know what talking to the jury would do to help his case, “but I couldn’t sit by and allow everybody to speak and have an opinion on me what happened that night, except for me.”

He said he failed at taking his own life. He’d wanted Stafford to drop him off at Percy Quin State Park, but they ended up at his friend Marvin Brumfield’s house in Magnolia.

Brumfield wanted to call a pastor to Godbolt’s mother, sister and aunt, but Godbolt said he wanted to talk to his pastor, Rev. Eugene Edwards. Brumfield suggested it was not a good idea.

Godbolt said he wanted to see Shon Blackwell instead. Blackwell is Edwards’ son-in-law and Godbolt’s cousin. Stafford and Brumfield took him to Coopertown Road, and Brumfield wrestled with him when he realized he had a pistol in his pocket.

Blackwell and his wife, Tiffany, who was Sheena May’s best friend, had left their home on Coopertown with Tiffany’s sister, Shayla Edwards, and Kimberly Lilly to go to Lee Drive at Sheena’s frantic phone call request for help.

Godbolt shot to death 18-year-old Jordan Blackwell and his cousin, 11-year-old Austin Edwards, then kidnapped Xavier Lilly at gunpoint to drive him around Lincoln County.

Sisters Tiffany Blackwell and Shayla Edwards, the daughters of Rev. Eugene and Cora Edwards, listened with tears wetting their faces.

“I ain’t even about me. Forgive me for not being able to fight my own battles that I was dealing with,” he said. “What happened in my life, and in y’all’s life as well is not a fruit from my heart. It’s fruit from my mind and my perception became my reality. I loved them. Thank you.”

Godbolt’s attorney, Alison Steiner, followed by showing the jury a photograph of her client with his wife and two children, “Bubble” and her baby brother, “Buddy,” taken about six months before the shootings. She pointed to the photo as proof of Godbolt’s love for his family and that he felt the need to protect them.

She said he didn’t have a plan or it could have driven straight to Coopertown Road from Lee Drive without driving for hours covering miles in Lincoln County and Pike County.

She said his concern after his arrest was not about his bullet wounds. It was about his family.

Steiner tried to paint Sheena May as a liar, who said she was rarely happy in 17 years with Godbolt.

“This was a family that had happy times. That Cory loved Sheena. Sheena loved him,” she said.

She brought up that May’s divorce from Godbolt that she said was final, though filed in November, has not been finalized, attempting to discredit her as a witness. She accuses her of using her anger to exaggerate events of abuse.

Adams said Godbolt killed people to cause pain to Sheena May for rejecting him.

“Is it reasonable to love someone so much that you would go out and kill eight people? That’s for you to decide,” he said.

Evidence shows that his rage started long before he ever got to Lee Drive, Adams said. His rage started when he loaded the guns into his station wagon from his home — a Serbian 7.62×39 AK-47, a Windham .300 Blackout AR-15 and a .40 Smith and Wesson pistol and a duffel bag of ammunition.

Adams detailed for the jury again how Godbolt went to Lee Drive and “stuck that gun in officer Durr’s face and pulled the trigger” before shooting others in the house — Brenda May, Toccara May and Mitchell.

“He stood over Toccara May as she’s lying there with her arm up in a defensive posture, and what did he do? He put three or more into her,” Adams said.

Testimony shows that Durr was likely still alive because blood was smeared on his arm like he was trying to move and he had his wedding ring in his hand underneath him.

“What did Cory Godbolt do? Did he leave? Did he ask for help? He went to his car and got these two guns and proceeded to come in and finish the job that he had already started,” Adams said, holding up the pair of rifles.

Durr was shot through his vest and then shot in the back of the head.

“That is deliberate design murder. That is capital murder,” he said.

Adams told about the gunfight with Lincoln County Sheriff’s Deputy Timothy Kees, who kept Godbolt from retrieving additional ammunition from his car at the risk of his own life.

He talked about the kidnapping of Stafford, who left with Godbolt to protect her three children asleep in their bedrooms around midnight, and Godbolt’s lie to Lincoln County Sheriff’s Deputy Chief Johnny Hall, Godbolt’s cousin, who was told by Godbolt that he would not come out of the house on Lee Drive. Godbolt told Stafford it bought him some time.

Adams said Godbolt, after riding around with Stafford and then adding his friend Marvin Brumfield to the mix, had them drive to Coopertown Road to the home of Shon and Tiffany Blackwell, where he blasted through the door and killed Jordan and Austin and kidnapped teenager Xavier Lilly.

He talked about Godbolt stealing a car belonging to Wykeshia Bracey at gunpoint from her husband Henry Bracey and his brother, Alfred Bracey, then about Godbolt threatening his own brother, Kenyatta Godbolt, at gunpoint, for a set of keys,

Then Godbolt went to the Burage home on East Lincoln Road.

Godbolt went from room to room of that house — his blood splatters confirm it.

“And he finds Sheila Burage hiding in a closet and puts two in the back of her head,” he said.

Godbolt told his brother, Chris Godbolt, that his intention was to commit suicide by cop.

“There is no indication whatsoever of any type of suicide by cop,” he said, noting the two assault rifles were left at the Burage home without bullets, and his pistol on a chair with a few live rounds in it.

The jurors saw the crime scene photo of Austin sprawled on his aunt’s couch and his older cousin Jordan crumpled on the floor where he had used his body as a shield to protect Austin’s older brother, Caleb.

“Deputy Durr was doing his job, doing something he loved, and that man executed him. Shot him in the face, shot him through his vest, shot him in the back of the head as he’s lying there, clutching his wedding ring.

Adams described a conversation between Austin and his mother a week before his death about learning to breathe correctly while jogging near their church in Bogue Chitto.