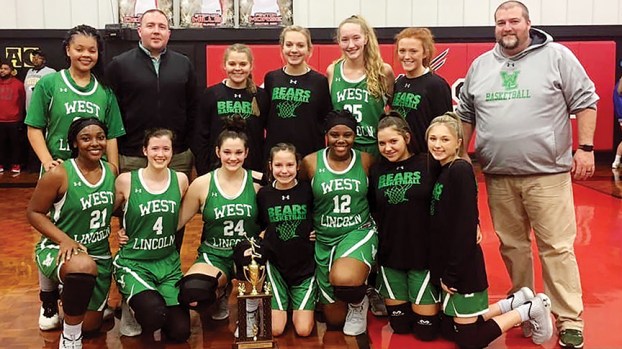 File photo West Lincoln is trying for a second-straight semifinal appearance when they meet Bay Springs today in a MHSAA third-round game. Last season, the Lady Bears were 2A runners-up.

Last season as the West Lincoln Lady Bears made a magical run through the 2A state tournament, they played three of their five playoff games in Jack Case Gymnasium.

With changes to the MHSAA playoff format that moved all third-round games to neutral sites, West Lincoln will hit the road for their quarterfinal game today against Bay Springs.

The Lady Bears (19-8) and Lady Bulldogs (25-4) meet at 4 p.m. in Marvin White Coliseum on the campus of Pearl River Community College in Poplarville.

The winner will play the winner between New Site (32-1) and Coahoma County (27-3) at 9 a.m. on Tuesday. That game will take place at the Mississippi Coliseum in Jackson. The 2A finals are at 1 p.m. on March 6 at The Pavilion on the campus of Ole Miss.

West Lincoln beat Enterprise-Clarke 85-49 in their opening round game and Union 62-50 in the second round in Case Gymnasium.

Bay Springs were 63-39 victors over Wesson in their opening round game and then beat East Marion 54-40 in the next round.

The Lady Bulldogs split their regular season matchups with region rival Puckett before crushing the Lady Wolves 67-43 in the Region 5-2A tournament finals.

West Lincoln dropped a 62-55 loss at Puckett (27-3) in their season opener. Puckett is meeting Taylorsville today at 5:30 p.m. in another quarterfinals game.

WL is a much different team today than the group that lost to Puckett back on November 12. Replacing four senior starters was a process that took some time.

Despite her height Wilson is best playing away from the basket as she’s tops on the team with 50 made 3-pointers this season.

Sturkey was the energy off the bench last season as a sophomore. As a junior she’s now the first option in the paints. She’s averaging 16.7 points, 4.7 and 2.6 steals per game.

Pairing Sturkey and Addison at the top of the West Lincoln zone defense gives Smith two quick, instinctive players that are naturals at getting into passing lanes for steals that then translate to easy baskets.

Addison has been a revelation in her debut varsity season after leading the WL junior varsity to a perfect record last season as a freshman.

Blessed with great court vision and the ability to dribble strongly with both hands — a skill that comes with hours of practice — Addison is averaging 5.0 assists per game. She scores 14.3 points per night and makes a team high 4.1 steals per contest.

Junior Jena Hughes is also a substitute at the guard position and sophomore Abby Jackson is another forward that can come off the bench.

When watching the Lady Bears it’s not unusual to see Addison paired with four forwards as she’s the only true ball-handling guard in the bunch.

Smith and his crew make it work by staying spaced out. Wilson’s outside shooting help space things out and Sturkey is at her best when she’s slashing towards the basket for an entry pass.

Handling the Bay Springs pressure and getting some opportunistic baskets while limiting turnovers will be a key for WL today. The Lady Bulldogs and coach Nedra Hosey like to push the pace, while West Lincoln would prefer a more deliberate speed.

Bay Springs has an experienced group with five seniors that all play key roles for the team. Senior guard Kaitlyn Ellis and senior 5-foot-11 forward Jaliyah Shelby are the top two scoring options for BSHS.

Last season Bay Springs was beaten 76-73 by Puckett in the quarterfinals.