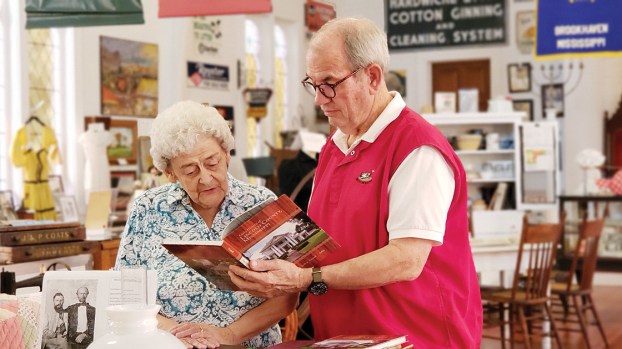 The Lincoln County Historical and Genealogy Society can’t fit 150 candles on a cake to celebrate the county’s birthday, but that won’t stop the celebration.

Members are planning a party at the museum, though a date has not been set.

“Joe (Brown) and I thought about having a birthday cake that says ‘Happy Birthday, Lincoln County’ and some punch or something,” said historian Sue Dorman.

President Joe Fernald said plans are also underway to create a display to be tied into the 150th creation of the county. If anyone has an item that is representative of the county from 150 years ago, the museum can accept it as a bequest with a condition that the item not be sold. If the museum ever closes, the items will be returned to the family, Fernald said. Bequests can also be accepted for a limited time, such as for the month of April only in conjunction with the birthday celebration.

Dorman researched the history of Lincoln County’s creation for the LCHGS’s most recent newsletter.

According to the newsletter, in 1870 there was a growing agitation for a new county to be formed out of part of Lawrence County.

“There were those who wanted the new county named for a former Mississippi governor, but these were greatly outnumbered,” historian Matthew Ard wrote the local newspaper in 1961.

But Republicans who wanted the county named for Abraham Lincoln dominated the Legislature.

“Dr. John Gartman, a resident then of Brookhaven, according to C.G. Wood, a grandson, was in sympathy with the plan to name the new county for the former governor, but the odds in the Legislature of which he was a member was greatly against him,” he said.

Gartman supposedly had been approached with a plan to bribe a group of residents for 75 cents per man to swing the vote in favor of the former governor. A conference was called by Gartman and among influential local citizens attending were Maj. R. W. Millsaps, later founder of Millsaps College, then a resident of Brookhaven, and Dr. H. F. Johnson, longtime president of Whitworth College.

Historical documents show that Gartman believed the plan to name the county after Lincoln would be successful, but he vowed to see to it that there was no mention of “Abraham” in the act creating the new county, and since there was an American patriot hero of our American Revolution of 1776 named Lincoln, why not our county be named for him.

The Mississippi Senate Journal of 1870 does not list the name of “Abraham” and in all extracts the new county is referred to as the County of Lincoln.

On March 18, 1870, Gartman introduced a bill to incorporate a new county and after passing the House and the Senate it was signed by the governor April 8, 1870.

“Thus our county of Lincoln, formed mostly out of Lawrence, but also from bits of territory from Copiah, Pike, Franklin and Amite came into being,” Ard wrote.

Gartman was appointed as treasurer as one of Lincoln County’s first officers, and others were: John W. Moore, sheriff; F. A. Clover, clerk; and John W. Steward, circuit clerk. Moore and Clover were both carpetbaggers, the former an ex-Union officer from Rhode Island, and Clover is said to have been from both Chicago and St. Louis.