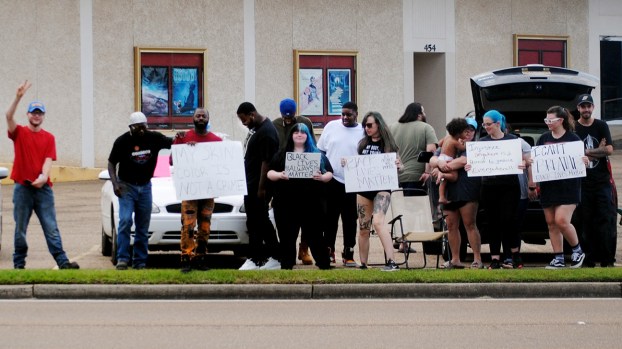 Photo by Brett Campbell/ A group of concerned citizens staged a peaceful protest on Brookway Boulevard Monday. Another protest in cooperation with the Brookhaven NAACP Chapter will be at City Park Sunday, beginning at 4 p.m.

A peaceful protest scheduled for Sunday in Brookhaven has changed location and time.

Parties interested in joining the “Peaceful Demonstration for Mr. George Floyd” should meet at Brookhaven City Park at 4 p.m.

Co-organizers Jessica Mae and Rev. Rico Cain stress that the demonstration is peaceful only, because its goal is peace.

“The local NAACP branch and other local community leaders will have a peaceful demonstration at the City Park Sunday … for Mr. George Floyd, protesting the brutal killing,” reads a portion of the letter presented to Brookhaven’s Board of Aldermen Tuesday evening by Cain.

“The protest is for justice for him, all our brothers and sisters unjustly killed and how black men and women are racially profiled. We want equality for all people regardless of their race,” the letter continues.

Protestors are asked to wear masks and gloves and “conduct yourselves peacefully and responsibly.”

“We don’t want to lose focus on why we are demonstrating,” Cain said.

Cain stressed the group welcomes all people who are truly standing for change.

Monday afternoon around 5 p.m., people from Brookhaven, Lincoln County and other nearby areas began gathering in the parking lot of Westbrook Cinema 4 on Brookway Boulevard to hold signs and show support for one another in the wake of recent events across the nation.

The death of Floyd in Minneapolis May 25 and the riots that were sparked across the United States are but the latest of events that have highlighted not just racism, but unchecked abuse of power and blatant displays of hatred and expressions of violence in many locations.

A Brookhaven resident who identified himself simply as Gavin said the group only wants to bring non-violent protest to highlight injustice.

Holding signs with statements like “No Justice, No Peace” and “Injustice anywhere is a threat to justice everywhere,” the group was visited by local NAACP chapter president Rev. Rico Cain and Brookhaven Police Department Chief Kenneth Collins during their activity Monday, both of whom “gave their blessing” to the gathering, according to statements on Gavin’s Facebook page.

I have spoken with the president of the NAACP, and we will be coming together Sunday, June 7th … to peacefully protest in silence. If you care to join us please do so. Please wear a mask, because COVID-19 is still a real thing and we must respect the anxiety and fear that others have of it. This protest will be peaceful. We will not run around and move. We will simply stand together.There will be no violence or yelling happening. The only way to be heard is to stand together with our signs and let people read what we have to say.

This protest is to stand up for the loss of George Floyd’s life and against police brutality. This protest is not about violence and hatred. It will be to show that Black Lives matter and that the violence MUST STOP! Silence and peace will help us to convey our voices and let the people know that we come in peace and only want fairness.

All lives matter, but especially BLACK LIVES! Help me to stand up for my neighbor who is too afraid to stand up alone.