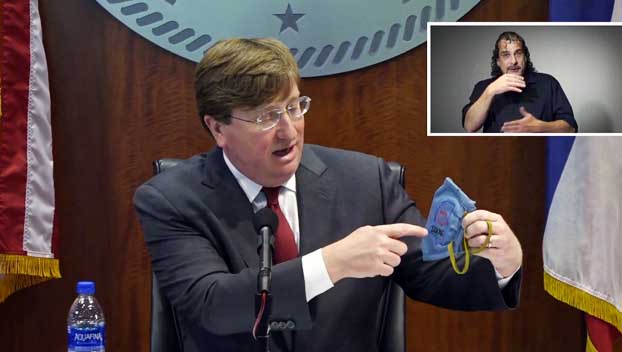 Mississippi Gov. Tate Reeves shows off his mask as he announces new restrictions for seven counties in the state in an attempt to curb the spread of coronavirus cases.

Earlier this week, as Tennessee registered what then was its highest single-day coronavirus case increase, Gov. Bill Lee held a news conference and issued a stern response.

It wasn’t a mandate to wear masks in public or clamp down on businesses or social gatherings. Instead, it was a plea for residents to do the right thing.

“When we have people dying in this state as a result of this virus, we should be taking personal responsibility for this,” the Republican governor said.

It was the same message Lee issued in late March as the COVID-19 disease was beginning to spread. He has vowed to stick to the personal responsibility mantra, with no plans to reinstate stay-at-home restrictions or impose statewide mandates — even as photos of unmasked people crowding bars and outdoor concerts across Tennessee spread across social media.

Instead, Lee signed an executive order Friday that allows local officials to issue their own mask mandates if they want — as Nashville and Memphis had already done.

Elevating a message of personal responsibility over statewide crackdowns on businesses and requirements for people in public spaces has been a consistent approach among certain governors during the coronavirus crisis. That’s especially true in Republican-leaning states that had relatively few cases in the initial months of the outbreak but have begun to spike in recent weeks.

“You shouldn’t have to order somebody to do what is just in your own best interest and that of your family, friends and neighbors,” Alabama Gov. Kay Ivey, a Republican, said earlier this week as she urged people to wear masks and take other precautions but downplayed the effectiveness of statewide orders.

Texas Gov. Greg Abbott, a Republican, has frequently invoked personal responsibility but took more decisive action this week in ordering Texans to wear masks in public in most cases. That came after another Republican governor, Doug Ducey of Arizona, changed direction and allowed mayors to make mask-wearing mandatory in their cities.

Those actions contrast with governors such as Republican Henry McMaster of South Carolina, who has refused a statewide mask order even as confirmed cases rise swiftly and the state’s rate of positive tests is three times the recommended level.

McMaster’s focus on rebooting the economy placed South Carolina among the first states to reopen. He has since said he won’t close down the state again while emphasizing the need for the state’s residents to follow hygiene and social distancing recommendations.

“We cannot keep businesses closed forever,” McMaster said in defending his decision. “What it boils down to is, we must be careful individually.”

West Virginia Gov. Jim Justice, a Republican, has appealed to residents’ sense of duty to help prevent the disease from getting worse, but recently warned that he might impose a mask mandate as cases in the state continue to rise.

In South Dakota, Republican Gov. Kristi Noem has largely avoided ordering restrictions during the pandemic and refused to order social distancing or mask-wearing for President Donald Trump’s visit to Mount Rushmore on Friday, an event that drew thousands.

She has consistently invoked personal responsibility as a key strategy in combating the virus.

“Every one of them has the opportunity to make a decision that they’re comfortable with,” Noem told Fox News.

How well those calls for voluntary good behavior are working is another matter. COVID-19 infections are soaring in places like Tennessee, South Carolina, Arkansas, Alabama and other states where Republican governors have balked at statewide mandates and business shutdowns.

The message is not limited to Republicans.

In Louisiana, an early hot spot where cases and hospitalizations are again on the rise, Democratic Gov. John Bel Edwards has refused to implement a statewide mask requirement. Instead, he regularly calls on people to be “good neighbors.”

Another Democrat, Montana Gov. Steve Bullock, said residents should wear masks when indoors and in crowds. But as the state passed 1,000 known cases, he continued to promote personal habits over any statewide mandate.

“Let’s recommit to taking care of our neighbors so we can move forward together and not have to take any steps backwards,” he said.

Poor participation in social distancing and mask use led Dr. Aaron Milstone, a pulmonary and critical care physician at Tennessee’s Williamson Medical Center, to warn that simply relying on public encouragement is inadequate to combat a pandemic.

He compared virus-related statewide mandates to other public safety laws.

“If we really want to slow the spread and buy time for us to get to a vaccine … then we need to start treating the idea of physical separation the same way that we do with speed limits and seat belts and drunk driving laws,” he said.

Still, the appeals to personal responsibility over government mandates reflect the political realities in many of the states where governors have so far refused to issue statewide orders.

In Utah, Republican Gov. Gary Herbert has repeatedly urged voluntary mask use but has encountered withering criticism when trying to impose even limited mandates. The more liberal-leaning urban areas of the state have implemented mask measures, but in the more rural areas restaurants and other indoor areas are full of people not wearing them.

Herbert’s office recently issued a statement on behalf of interfaith leaders throughout Utah. It encouraged residents to wear masks because “one cannot claim to love one’s neighbor while deliberately putting them at risk.”