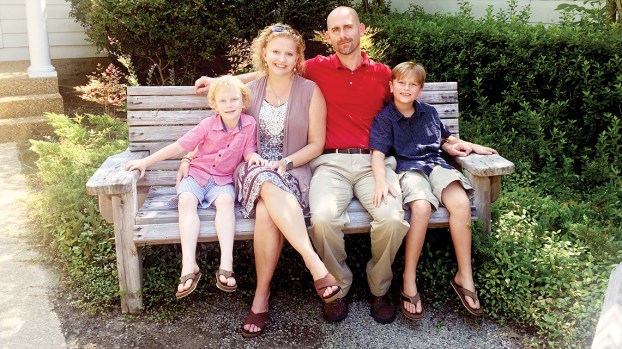 In non-coronavirus times, the church at 814 Marwood Loop SE meets in small groups of four to six people in restaurants on Wednesday nights to discuss the Bible, make and strengthen disciples, and live life together, said pastor Stuart Purvis.

But it also holds Sunday services.

Before taking the job in April 2016, Purvis was already on a mission to “change the culture of the church.”

“Getting inside people’s lives really gets messy, but that’s what Jesus did. In John 17:4, Jesus said, ‘I have finished the work which you have given me to do.’ I used to think that meant the cross, but it means we are to continue the work that Jesus started. If we’re not fishing, we’re not following.”

Being part of a small group is “not just telling people ‘call if you need me,’ but to show up at two in the morning if they need you,” Purvis said.

The Natchez native lives in Bogue Chitto with his wife Michelle and sons Dawson, 9, and Reiden, 6.

Purvis was a pastor’s kid, but never imagined he would become a pastor.

He took a job as administrative assistant at Woodland Hills Baptist in Jackson while his wife was working on her master’s degree in occupational therapy. In the process of moving, Purvis said God told him he’s supposed to be in the ministry.

“I guess God was just prepping me the whole time,” he said.

Purvis was at Woodland Hills six years and pastored Spring Creek Baptist in Philadelphia for 6 ½ years before he came to Mt. Moriah.

He later obtained a master’s in philosophy of religion from Southern Evangelical Seminary and Bible College. Purvis said he studied philosophy because he has seen many youths walk away from the faith, and wanted to know how to answer questions from his kids and those he pastors.

There’s a pervasive culture in which people say they’re Baptist because their grandfather was Baptist, Purvis said. Or they say they’re saved because they walked the aisle, were baptized or their name is on the church roll.

“People think that because they say a prayer, they’re saved, but it’s supposed to be a saved live, a surrendered life, because if you’re saved, you will work. You will follow Jesus and die to yourself.”

“The Bible says we will be known by our fruit. We are to try to hold each other accountable. Sometimes it gets messy, but we should call out things as they are and love each other and pray for each other.”

He enjoys family time and he and his wife hope to adopt a couple of girls from foster homes.

His favorite scripture is John 8:31b: “If you continue in my word, you are my disciples indeed.”