County schools back in session 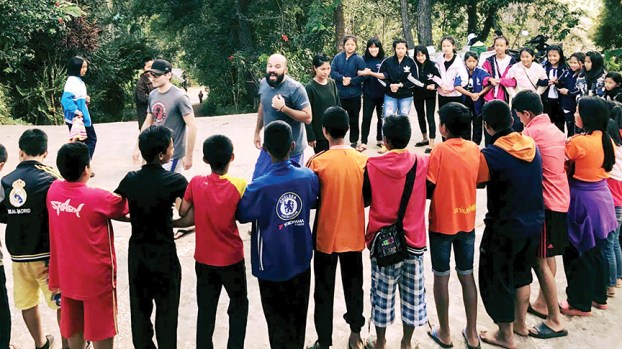 Photo submitted Brookhaven native Jonathan Espy, center with beard, teaches students and others in an unidentified village in Thailand how to protect themselves and others from human trafficking.

When people in Lincoln County are settling down for the night, Brookhaven native Jonathan Espy is halfway through his morning the following day, working to rescue victims of human trafficking and teaching others to do the same.

Espy and his wife Chrissy are the founders of Spiritual Warriors Against Trafficking Ministries International (SWAT). As the couple served as Christian missionaries in Thailand, Espy grew frustrated with his job teaching English. He was also working as an assistant pastor at a church, but needed the teaching job to keep a visa. So he decided to teach a self-defense class.

“It took off and it was blessed,” Espy said.

In 2011, an Australian police officer with the anti-human trafficking ministry Destiny Rescue heard about Espy’s class and asked him about teaching self defense to rescuers with the ministry. After evaluations and other preliminary work, Espy met with a group of three men in a rat-infested attic in Northern Thailand where he taught them techniques to use while rescuing victims of human trafficking.

From there it progressed to what’s now a total of six organizations, with Espy teaching men and women how to safely use martial arts and other self defense techniques to bring human trafficking victims out of the sex slave trade.

The global coronavirus pandemic has affected SWAT’s ministry in some respects. Espy is not able to effectively travel to and from other countries to offer in-person training, but he has been able to continue training within Thailand, observing restrictions put in place by the government and the organizations requesting training.

“The good thing is that the teams that are out there are still rescuing, looking for targets every night. One of the teams in the Philippines just did a bust and rescued several kids. One kid was COVID-positive, so all of the team had to be tested and is now in quarantine,” Espy said. “But other teams are still rescuing nightly.”

One or more teams is out in each of several countries — including Cambodia, Indonesia, the Dominican Republic and at least one Espy cannot name — “running constantly,” he said. “Probably 15 at any given moment.”

SWAT’s website and social media presences proclaim their mission “is to fight until the whole world is free.”

“We are a non-profit organization that fights trafficking worldwide through awareness, training and prevention methods. Our goal is to spread the gospel of Jesus Christ in every aspect,” the ministry’s mission statement reads. “We believe every human being should be set free, physically and spiritually.”

Contrary to what people may believe, Espy says the problem of human trafficking is not necessarily getting worse.

“It’s getting more noticeable,” Espy told The Daily Leader via video call from his home in Chiang Rai. “It looks like it’s getting worse when it’s always been this bad — people are just now noticing.”

Espy says the awareness comes from a growing presence of trafficking activity online. The bars and brothels are not open now because of the COVID-19 pandemic, so other outlets and avenues come into greater play.

“In America, a lot of it happens online, anyway,” Espy said.  “A lot of ‘good’ people have gotten mixed up in it because they’re stuck at home, with nothing to do and on the internet. And the weirdos and perverts are online all day anyway.”

People in Brookhaven need to be aware of trafficking because people everywhere do, he said.

“It’s really crazy because there is not a place on earth that trafficking does not touch,” Espy explained. “Wherever there is poverty and drug problems and opportunity — where people want to buy another person — they’re going to be people sold, because these things are interlinked.”

“It’s like for a lot of people who sell drugs. They say, ‘I need money and this is easy.’ It’s easier than getting a job. In the same way, people say, ‘I could sell this girl for a couple hundred bucks a pop and make money.’” Espy said.

“Everywhere in America has poverty, so human trafficking is going to take place there.”

The average person needs to know about the problem of trafficking for one main reason, Espy said — it exists.

“Children are being sold every single day online and in the flesh,” he said. “It is not a conspiracy theory at all. That actually happens. It happens every single day in whatever town you’re in.”

But more than being aware of the issue, people need to try to do something about it.

“Don’t just click ‘like’ on Facebook or just share a photo or post. That’s good, but also get up and do something,” Espy said. “Get involved in your community with kids and with people who are in really bad situations. May it’s the ‘juvenile delinquents’ or the kids on the outskirts. Get involved with community centers and churches, who are supposed to be doing this already, to reach out to those people to show them the love of Christ. Because if we don’t, someone else is going to come in and show them ‘love’ and attention to make them feel cared for so they can turn around and sell them into the sex slave business. That’s called grooming.”

A lot of good organizations exist worldwide that are trying to fight human trafficking on a daily basis, Espy said, and it costs money to do that. SWAT does fundraisers to pay for training, to fund rescue operations and to take care of children who have been rescued.

SWAT is also in the beginning stages of building what Espy calls a safe village.

“We’re trying to buy 10 acres right now and build houses there for families that will house six to eight rescued kids with a family,” Espy said. “If they are too young or can’t go back to a family where it’s safe for them, these people will be their families until they grow up.”

Espy said they are actively looking for Thai families who will make the commitment of 10-15 years to help raise these children in a safe environment. SWAT also needs more people to get involved in other ways.

“When we have teams that can come over again, come over and work with us hands-on,” Espy said. “Whether you’re a teacher, plumber or pastor, we can use you. As long as you love Jesus we can put you to work.”

For more information on SWAT or what the ministry does, visit SwatMinistryIntl.org, email info@swatministryintl.org or visit SWAT’s local office at Hunsucker Insurance, 826 Union Church Road.