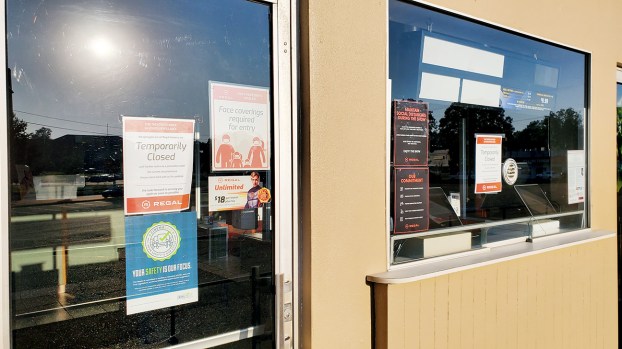 Photo by Brett Campbell Signs on the doors and window of Westbrook Cinema 4 tell potential patrons of the company’s temporary closures.

In the latest blow to the beleaguered film industry, the second-largest movie theater chain in the U.S. is temporarily shuttering its locations due to a lack of blockbusters on the calendar and major domestic markets like New York remaining closed.

Cineworld Group PLC said Monday it would close 536 Regal cinemas in the U.S. and 127 Cineworld and Picturehouse venues in the U.K. this week, affecting some 45,000 employees.

“This is not a decision we made lightly,” said Cineworld CEO Mooky Greidinger.

In the past few days, the already decimated 2020 release calendar lost another big film in the James Bond pic “No Time to Die.” It is at least partly due to the fact that one of the country’s biggest markets, New York, has not committed to a plan or a date for reopening cinemas in the state.

Cineworld has high debts and is, like the wider industry, struggling with the effects of the pandemic. The absence of the biggest North American markets and a consistent, solid release schedule from Hollywood studios have been devastating to their business.

“We never argued the fact that we needed to be closed until we saw that similar activities to us started to open,” Greidinger said, citing indoor dining. “We cannot be in a situation where we lose more cash when we are open than we lose when we are closed.”

Efforts to slow the spread of the virus resulted in closure of most cinemas for nearly six months. Many started tentatively reopening in late August, anticipating the release of money-making blockbusters, like Nolan’s “Tenet,” the Bond pic “No Time to Die” and Marvel’s “Black Widow.” Exhibitors also poured resources into enhanced safety and sanitization protocols, including limited capacity theaters, social distanced seating, cashless transactions and staggered showtimes.

But ticket sales for Warner Bros.’ “Tenet,” the first major film out of the gates, were not as strong in the U.S. as hoped, likely a combination of audience reluctance to return to theaters and the effects of big markets like New York and Los Angeles remaining closed. While some analysts stress that films need to play the “long game” at the box office in this current environment, studios responded by delaying most other major films that had been set for the fall and winter.

But others abandoned the year entirely, including Marvel’s “Black Widow,” Spielberg’s “West Side Story” and Universal’s “Candyman,” all of which were pushed to 2021 in recent weeks.

Although there are a handful of major films still set for 2020, like Pixar’s “Soul,” as well as a consistent calendar of independents and art house films, Friday’s announcement that “No Time To Die” was being delayed to 2021 came as a final blow.

Without the big releases, Cineworld said it can’t give customers “the breadth of strong commercial films necessary for them to consider coming back to theaters against the backdrop of COVID-19.”

“We did everything in our power to support safe and sustainable reopenings in all of our markets — including meeting, and often exceeding, local health and safety guidelines in our theaters and working constructively with regulators and industry bodies to restore public confidence in our industry,” said Greidinger. “We cannot be in the situation where every week we are getting another delay and another delay.”

The industry had been rocked by the pandemic — first being closed for months and then operating at a fraction of previous capacity, said David Madden, analyst at CMC Markets. Cineworld had also been highly leveraged, having largely funded its acquisition of Regal Entertainment in 2018 through debt.

“Today the company confirmed they will be assessing their liquidity options, and it plans to update the market on the resumption of business in due course,’’ he said. “It seems that Cineworld is hunkering down and they are holding onto their current liquidity position, with the view to probably having a reduced service when they re-open.’’

Greidinger doesn’t regret reopening in August — at the time there was a solid release schedule and he believed that New York would have eased restrictions sooner.

Now there is, “Not much to do but to wait,” Greidinger said. And he hopes New York Gov. Andrew Cuomo will give “the greenlight soon.”

The business, he said, needs a set blockbuster calendar extending six to eight weeks in the future in order to reopen. Greidinger hopes that might be settled before Christmas, in time for “Wonder Woman 1984.”