Basketball off to slow start as COVID-19 causes cancellations 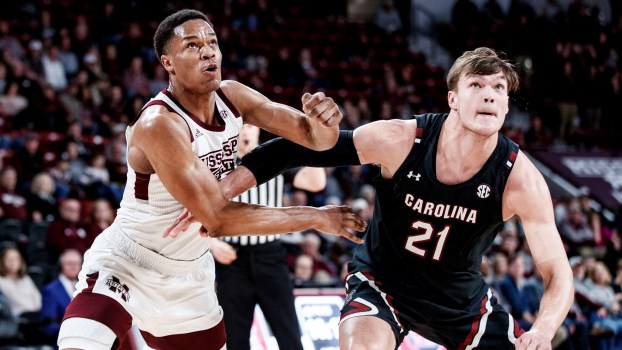 (AP) — The Memphis Grizzlies took Mississippi State forward Robert Woodard II with the 40th pick in the NBA draft.
Memphis had only one pick entering Wednesday’s draft and there was some indication that the Grizzlies were working on trades for a late-first round selection and/or a pick earlier in the second round. And Zach Kleiman, executive vice president of basketball operations, indicated the team gathered several more pieces, although he could not discuss specifics.
“This is the vision for what we are trying to building,” Kleiman said. “These are the type of individuals we are trying to bring onto our team. … Guys who are tough. Guys who are physical. We got some more shooting.”
The selection of Woodard, who averaged 11.4 points and 6.5 rebounds, is expected to provide depth on a young Memphis frontline that was dominant last season.
The Grizzlies’ first-round spot – the No. 14 overall – went to Boston, the long-awaited payoff for a 2015 trade with the Celtics that sent Jeff Green to the Grizzlies.
Memphis’ original second-round pick at No. 44 was sent to Chicago in a 2019 trade for Justin Holiday. But Memphis picked up the No. 40 choice from Phoenix as part of a deal that brought De’Anthony Melton to the Grizzlies.
The team has some solid foundation pieces already in place centered on last year’s No. 2 pick and electrifying point guard Ja Morant, the NBA Rookie of the Year last season. The emergence of fellow rookie Brandon Clarke, also named to the All-Rookie team, helped create a core of young talent for the Grizzlies along with 6-foot-11 forward Jaren Jackson Jr.
The frontline with Jackson and 7-foot center Jonas Valanciunas helped the Grizzlies lead the league in points in the paint and finish fifth in rebounding.
“We identified guys that we really, really wanted to go out and get,” Kleiman said.
The young team fell just short of the playoffs. While holding the No. 8 and final spot for the postseason in the Western Conference, the Grizzlies lost in the play-in series with the Portland Trail Blazers. Memphis finished the season 34-39, well ahead of projections that it would be near the bottom of the West standings during a rebuilding year.