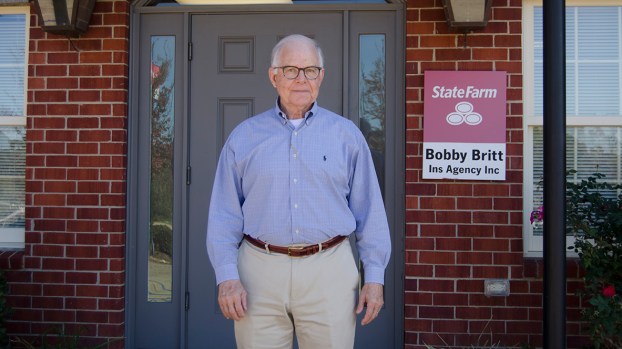 Bobby Britt isn’t a stranger to Brookhaven. A Lincoln County native, Britt grew up in the Loyd Star community before moving to Wesson. He attended Copiah-Lincoln Community College and the University of Southern Mississippi upon graduation from high school. His wife Gloria and he have two children together, Kathy and Jared.

Britt worked an assortment of places before selling insurance, including Kellwood Apparel and Farm Bureau. He first got into data processing with Farm Bureau.

“Computers were just coming out. I just wanted to be a part of that,” Britt said.

“When you work for a company, people can be cut,” Britt said. “You saw that unlike prior to when you could work for one company and retire from them, that trend began to change.”

This served as his initial motivation to get into the insurance business. But that wasn’t what made him stay.

Britt will have two agents taking over in his office.

“And that’s exciting to me,” Britt said. “It’s top quality folks. I’m glad to know that.”

Britt says the community has been good to him.

“They have supported me way more than I deserve and I appreciate that,” Britt said.

For him, the biggest challenge he’s faced in his career was when Britt found himself in the gray area and a solution couldn’t be found for anyone.

“I wanted to do the right thing for State Farm and my policy holders, so I had to mitigate the difference of opinion between the two,” Britt said. “The thing that affected me the most when I don’t think the right thing was done and I couldn’t do anything about it, which was really rare.”

He said he couldn’t have done it all without his team.

“They aren’t my staff, they’re my team,” Britt said.

Upon retirement, Britt will be spending time with his family.