Hornets wrap up soccer season with split against Wesson 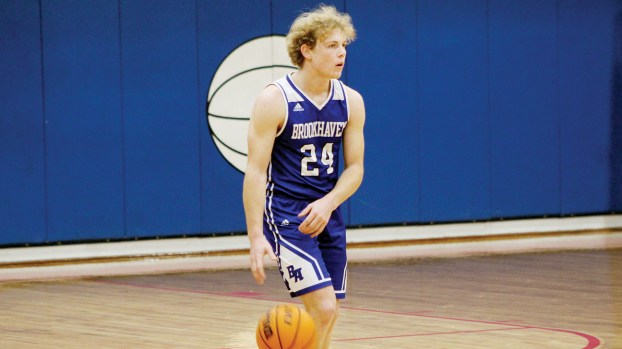 Photo by Cliff Furr Brookhaven Academy senior guard Gavin Brogden scored 12 points Thursday against East Rankin Academy on the road as the Cougars held on for a 43-39 overtime win in MAIS basketball action.

Brookhaven Academy traveled to Pelahatchie Thursday for one of the final non-division sets of games left on their schedule as they took on the homestanding East Rankin Academy Patriots.

In the opening girls’ game coach Ron Kessler saw his team hold ERA to single digit scoring in each quarter as the Lady Cougars cruised to a 43-26 win.

The boys’ game had some drama though as ERA guard Brodie Rials hit a 3-pointer at the buzzer to send the game to overtime tied at 36-36.

Rials desperation heave bounced off the rim and high into the backboard before falling back through the hoop at tight angle.

ERA went up 39-36 to start the extra 4-minute overtime period, but the Cougars would peel off six straight points to get a 43-39 win.

The Rials 3-pointer was preceded by a pair of Trey Fortenberry-made free throws with 14 seconds remaining that gave BA their 3-point advantage.

In overtime the Cougar tied the game at 39 with a long Gavin Brogden 3-pointer. Junior forward Tyler Fortenberry then closed the game out with four straight points that ended up being the difference.

Rials led East Rankin with 12 points in the loss.

The win was the fourth straight for the BA boys’ team as the Cougars moved their record to 13-10 overall. BA has cruised to a 3-0 record in MAIS 4A-District 4 play with wins thus far over Oak Forest Academy, Silliman Institute and Cathedral School.

Regular season play will wind down over the next two weeks as BA faces those three schools again along with fellow division foe Adams County Christian School. Last season ACCS and BA split their two regular season matchups on the boys’ side.

It’s been similarly smooth sailing for Kessler and his girls’ team as they’ve also faced little resistance in moving to 3-0 in district play. The Lady Cougars are 22-6 overall on the season.