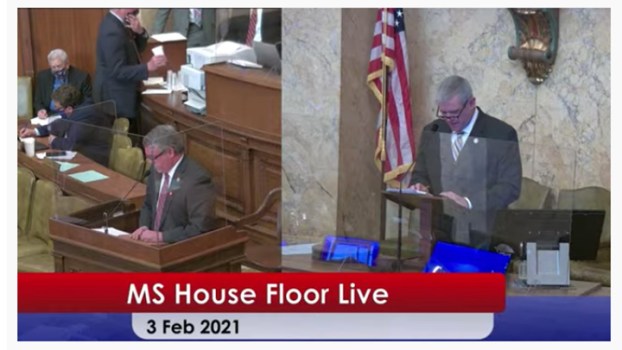 (AP) — Mississippi House members adopted a new rule Wednesday that bans people from taking videos of lawmakers on the House floor to capture what one leader called “gotcha” moments.
“If you see two of your colleagues in a spat and it looks interesting to you and you want to film it with your phone, this prohibits you from doing that,” House Speaker Pro Tempore Jason White said.
White, a Republican from West, said those who violate the rule would be subject to censure.
“If you’re looking for a ‘gotcha’ moment for your colleagues on the House floor with your phone, this rule prohibits it,” White said.
The change is one of a few updates to the rules that govern conduct in the House for the term that ends in early 2024. It wouldn’t apply to taking photos of guests such as veterans or championship teams visiting the Capitol, White said.
Democratic Rep. Robert Johnson of Natchez asked if White was concerned about free speech violations. He wondered if the rule would apply to reporters sitting in the House gallery, saying he didn’t believe legislators could control what journalists record.
White said legislators can’t control journalists recording in the House gallery, but they can limit journalists’ access on the House floor.
“If they felt the need to start recording or getting into conversations or recording actually on this floor, I think they are prohibited from that,” White said. “But if they felt they need to do that, Rules Committee would probably just revoke their press privileges.”
White said it’s not an issue the Rules Committee has faced in the past.
The rule was adopted by voice vote. Johnson voted against it, telling White: “It’s not because I disagree with your intent. I just think that the wording in that might cause us some problems.”
The rules changes in House Resolution 14 only affect the House, so the resolution will not go to the Senate or the governor.
Both the House and Senate sessions are live-streamed on YouTube.