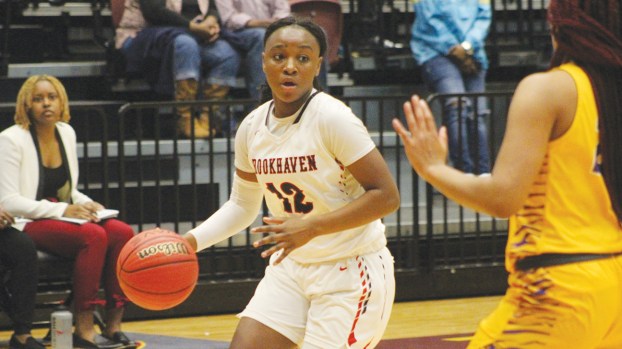 Daily Leader file photo Brookhaven High sophomore guard Angel Wilkinson and her team will host Gautier Monday at 6 p.m. in a MHSAA 5A first-round playoff game. The game and all other area playoff games were delayed a week by the wintery weather that affected the area.

The snow and ice that blanketed the state over the last week threw a major wrench in the scheduled opening of the MHSAA state basketball tournament.

Originally the girls were to play on Monday with boys’ first round games scheduled to take place on Tuesday. That got pushed back once from the state association and then pushed back again as it became apparent that traveling conditions would not improve until the weekend.

The rest of next week will be packed with games as the first, second and quarterfinal rounds will all be crammed into a six-day period.

Girls’ second round playoff games will take place on Wednesday, Feb. 24 and the boys will play the next day on Thursday, Feb. 25.

Last year the state quarterfinals were played in neutral site gyms all over the state while the semifinals were held at the Mississippi Coliseum.

Oxford and The Pavilion at Ole Miss hosted the 2020 championship games. This season — due to COVID-19 — quarterfinal games will be played at the home gym of the higher remaining seed and the Coliseum in Jackson will host the semifinals and championship games.

Semifinal play begins on March 1 in Jackson and will wrap up with the final set of championship games on March 6.

The Lady Panthers (8-5) finished as runners-up in Region 5-5A after losing 59-44 to Laurel in the championship game last week. The teams had split their regulars season matchups before Laurel took the rubber match on their own home floor.

Gautier lost 41-13 to Pascagoula in the opening round of their region tournament. They then bounced back to take a 43-21 win over East Central in the consolation game to earn a playoff berth.

Last season BHS finished as 5A runners-up and the previous two seasons they made the quarterfinal under coach Preston Wilson.

Natchez awaits the winner between Ole Brook and Gautier as NHS has a first-round bye after winning their division. Brookhaven played at Natchez on Jan. 19 and lost 54-39. Last season BHS hosted Natchez in a second-round game where they eliminated the Lady Bulldogs on their way to the 5A finals.

West Lincoln coach Brooks Smith and his team will welcome Lake High to Fleahop for their first-round matchup Monday at 5 p.m.

Lake finished as the fourth-place team in in Region 6-2A in both the regular season and region tournament.

The Lady Bears (16-2) are hosting a first-round playoff game for the fourth straight season. Two years ago, West Lincoln made the state 2A finals and last season the Lady Bears won a pair of home playoff games before getting knocked out in the quarterfinals by Bay Springs.

The winner between West Lincoln and Lake will play the winner of East Marion and Heidelberg in the second round.

Both Loyd Star teams are coached by Seth Britt. The Lady Hornets (13-6) will host Newton High at 5 p.m. Monday.

Newton was the top team in Region 6-2A — losing only one division game during the regular season — before being upset 47-45 by Philadelphia in the tournament semifinals last week. Newton won the 2A state title in 2019 by beating West Lincoln. Their head coach Marc Stribling was an assistant on that title winning team.

The winner between Loyd Star and Newton will take on the winner of the North Forrest and Taylorsville game in the second round.

On the boys’ side of things, Loyd Star (9-10) will host Philadelphia High Tuesday at 5 p.m. The Region 7-2A tournament title last week for LS was their second in three years.

Last season Philadelphia was a 2A semifinalist but graduated all five starters from that team.

In the second round the winner between LS and Philly will take on the winner of the St. Patrick and Enterprise-Clarke matchup.

Bogue Chitto will have both of their teams playing first round games this week as the girls finished fourth in Region 7-2A and the boys’ team were runners-up.

The Lady Bobcats (14-8) are up first Monday when they travel to Newton County to face the Union Yellowjackets.

Union was the only team in their region to beat regular season leader Newton before the postseason. They didn’t have to face Newton in the region tourney though as Philadelphia knocked NHS off in the semifinals. In the Region 6-2A finals Union beat Philadelphia 49-36. Philly had actually swept Union during their two regular season meetings.

The winner of the Bogue Chitto and Union game will face the winner between Puckett and St. Patrick in the next round.

Both Bogue Chitto teams are coached by Robby Walters. Tuesday the BC boys’ team will host Scott Central for their playoff opener.

The Bobcats (6-9) knocked off top seeded Wesson in the division tournament semifinals. It’s the first time for the BC boys’ team to host a playoff game since 2018 — a 49-46 loss to Pisgah.

Awaiting the winner of the Bogue Chitto and Scott Central matchup is a second-round game against the winner of East Marion and Mize.

Wesson traveling for both first round games

Both Wesson teams finished as the third-place team last week in the Region 7-2A Tournament and will be on the road for their opening round games.

Coach Michelle Nunnery and her Lady Cobras (8-9) will play at Philadelphia Monday at 5 p.m.

It’s the second straight playoff appearance for Wesson as the Lady Cobras have won 21 combined games over the last two seasons. That win total is more than Wesson won over four combined seasons from 2015-2019.

The winner between Wesson and Philadelphia will play the winner of Bay Springs and Perry Central in the second round.

In the boys’ matchup Tuesday, the Cobras (10-5) travel to take on a Union team that finished as runners-up in Region 6-5A.

Coach Rusty Newman and his team were 7-1 in regular season play against their division opponents. Wesson and Union also met in the opening round of the 2A state football playoffs. The score from that one looked like something from a basketball game as Union took home a 64-44 win over the Cobras. Both teams have several players who also suited up for their school’s football team.

Last season Wesson beat Taylorsville at home before losing at Philadelphia in the second round.

Enterprise boys back in the postseason

Coach Shane Adams has his Enterprise boys’ team back in the playoffs for the first time since 2017 after they finished fourth in the Region 7-2A Tournament last week.

The Yellow Jackets lost a close one — 59-54 — at Newton in 2017. Tuesday they’ll head back to Newton to take on the Tigers again in a first-round playoff game.

Newton lost their first region game of the season to Philadelphia and then didn’t drop another division game again as they took the Region 6-2A regular season and tournament titles.

Protecting the ball will be a key for EAC as they face a Newton team that likes to a fast paced game. They’re coached by Crandall Porter who won three 2A state titles at the school (two girls, one boys) before leaving to be the head girls’ coach at East Central Community College.

Porter also won a state title at ECCC before returning for his second stint at Newton.

The winner between Enterprise and Newton will play either Heidelberg or North Forrest in the second round.