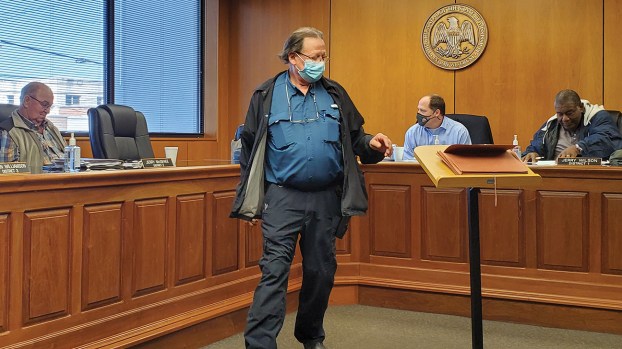 At the end of June, Clifford Galey Sr. will turn off his cell phone and take the radio off his belt for the final time as he retires from 39 years in Civil Defense.

Galey was in his 20s when he was injured in the oil field and had to take some time off. Buddy Ratliff, director of Lincoln County Emergency Management at the time, asked Galey if he would be willing to help him out a bit. With a background in volunteer fire departments, Galey was interested and eager to assist.

For 12-1/2 years, he worked as volunteer deputy director, while earning a living first at Oddee Smith Construction then as an emergency medical technician with King’s Daughters Medical Center.

When Ratliff retired, Galey applied for the job and became full-time director. On the first day of what will be 26-1/2 years, come retirement day, Galey asked his wife Cindy to come to the office with him and help him get organized. She remained on the job as a volunteer every day since.

“My wife has blessed me by helping me,” Galey said. “I’m blessed with a good job and the best blessing I have had has been her — because this is not a one-person job.”

The couple will celebrate 48 years of marriage this year.

Galey, 67, said it was time for retirement because he has fishing to do and wants to spend time with his eight grandchildren and three great-grandchildren, who live in Louisiana, Texas and Mississippi.

“It’s time. I’m past the retirement age,” he said. “It’s time to let some young person come in and take over.”

Galey submitted a letter to the Lincoln County Board of Supervisors Monday stating his intention to retire.

“Well, Clifford, I have appreciated you,” said District 4 Supervisor and board president Eddie Brown. Other supervisors agreed.

“Without everybody, I can’t do my job,” Galey said. “Sometimes it’s hard, but y’all make it as easy as you can.”

He expressed thanks to “everybody out there who helped through all the years, both on the job and private citizens. It’s been a blessing.”