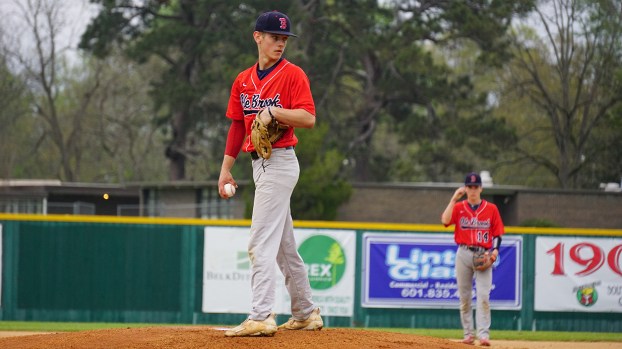 Photo submitted / Brookhaven High junior pitcher Maney Miller pitched the win for the Panthers Thursday as they went to Wayne County and brought home a 7-6 win in their MHSAA 5A playoff opener.

Wet weather has forced the postponement of the Brookhaven High home playoff baseball game that was scheduled for tonight on Moyer Field.

The game against Wayne County (13-11) will now be played Saturday at noon.
Thursday the Panthers made the long trek to Waynesboro to take on the War Eagles in a MHSAA 5A postseason opener.

Promptly after getting off the bus, Ole Brook spotted Wayne County a 5-0 lead in the bottom of the first.

Junior starter Maney Miller settled in though and didn’t give up another run the rest of the night.

Miller went six innings and gave up seven hits. He struck out 10 and walked one in giving up three earned runs.

In the top of the fourth BHS got it all back as they tied the game up at 5-5.

Bryson Porter got that inning started with a leadoff double for the Panthers. JP Wallace also doubled in the game for BHS.

Wallace drove in a team-high three runs and Darius Robinson added two RBIs for coach Matt White. Miller also had an RBI for the Panthers at the plate.

BHS took the lead in the top of the sixth with a pair of runs.
Wayne County wasn’t done though. With Miller out of the game due to hitting his pitch count, the War Eagles scored a run to cut it to a one-run game.

WC had bases loaded with one out when White brought in his son Matt to close the game out.

White stared down a rowdy Wayne County crowd and got a strikeout and a groundout to secure the win.

“So proud of the boys for gutting it out and getting the win,” said White. “They saw our number one in Manny and we’ll see they’re number one in game two.”

If a third game is needed, Brookhaven will travel to Wayne County for a 7 p.m. game on Monday.