Ole Brook routs Wayne County, on to 2nd round 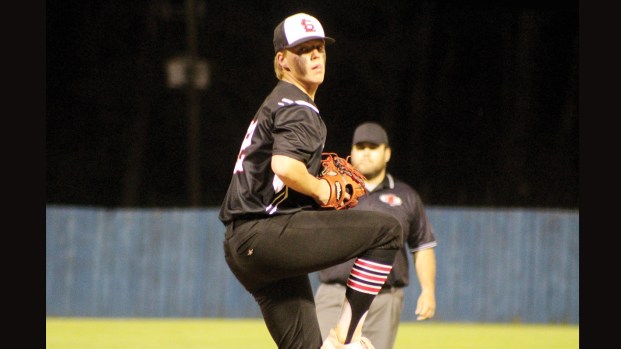 Photo by Cliff Furr Loyd Star junior pitcher Dawson Hester and the Hornets will take on Enterprise-Clarke in a 2A playoff second round series this week. The Hornets will host game one Thursday and a possible game three on Saturday.

Lincoln County has two of the final 16 MHSAA 2A baseball teams alive in the state playoffs as both Loyd Star and Bogue Chitto have second round series this week.

Coach Jared Britt and his Hornets next face Enterprise-Clarke (19-11) in a three-game series that begins Thursday.

LS hosts game one Thursday at 6 p.m. Game two will be played at Enterprise and starts Friday at 7 p.m. If game three is needed it will be played Saturday at Loyd Star at 6 p.m.

Sophomore Casen DeHart leads the Hornet offense at the plate this season with a .485 batting average as he’s also driven in a team-high 27 runs.

Hester, Hodges and junior Riley Easterling make up the top of the Loyd Star pitching staff.

Britt will need to count on quality starts from his best arms as Enterprise is a team that can also manufacture runs. They beat East Marion 9-0 and 11-5 in their opening round series.

Enterprise-Clarke was the only team to beat Taylorsville in Region 5-2A play this season as they finished behind the Tartars in the standings.

“They’re going to have a real scrappy bunch that will put the ball in play and pressure your defense,” said Britt. “Their pitchers are going to throw strikes and the whole team will play fundamental baseball. They aren’t going to beat themselves.”

Loyd Star swept Enterprise-Clarke in a 2019 second round playoff series when the two teams last met.

Finishing behind Enterprise-Clarke in the Region 5 standings were the Puckett Wolves.

Puckett (16-8-1) will be the next opponent for Bogue Chitto (14-16) when their second round series begins Thursday.

Game one is scheduled to start at 6:30 p.m. in Puckett. Game two will be played Friday at 7 p.m. back at Bogue Chitto. If game three is needed it will be played Saturday at Puckett.

BC is in the second round after winning a three-game series over Union in thrilling fashion. They won the series opener 13-10 on the road before Union came back to tie things up with a 13-3 win at Bogue Chitto.

In the rubber match Friday, you might have counted Bogue Chitto out once they trailed 6-2 heading into their final at-bat.

No one told coach Gareth Sartin’s Bobcats they were done though, as BC roared back to score six in the top of the seventh and hold Union to a single run in the bottom of the frame — securing an 8-7 victory

Senior Tristan Buffington pitched the win for BC as he gave up just four hits and three earned runs while striking out five in six innings. Colten Bales and Colton Frith combined to pitch the final inning for the Bobcats.

Bogue Chitto took advantage of 10 walks issued by Union as the Bobcats committed three errors and were outhit 4-2 in the game.

Frith, Buffington, Felder Sartin, Reid Smith and Eli Cupit had an RBI apiece for the Bobcats in the game three win.

Puckett beat Perry Central 8-2 and 11-0 in their first-round matchup.

Fellow Region 7-2A members Enterprise and Wesson saw their seasons ended in the first round. EAC lost 4-3 and 8-2 to Scott Central while Lake beat Wesson 10-0 and 14-9.